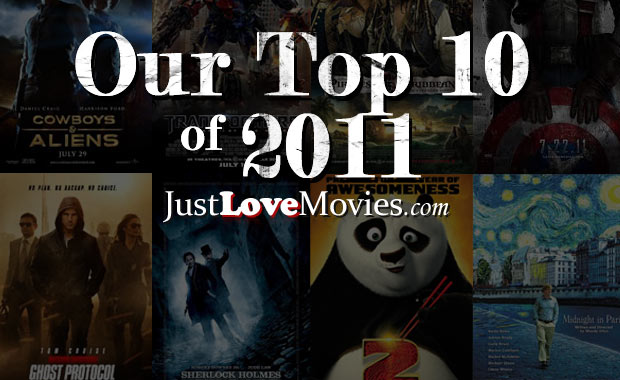 I’ll kick off my top picks with the disclaimer that anyone who knows me knows that I actually don’t ever check into R-rated films; it’s just a personal choice that I’ve adhered to for a long time (and I’m sure that’s a topic worth a blog in the future). With that said, JustLoveMovies.com focuses on anything below the R-rated bar, and as such, my top 10 movies of 2011 were chosen with that in mind…

Also, please keep in mind that these are actually my *favorites* and not necessarily the “best” movies of the year. 🙂 As an avid fan of movies, I want to come away entertained more than anything, so if a film was well made and great fun, I enjoyed it. There are other good movies from this year — including films with fantastic acting and direction (like The Help), but when it comes to movies I’ll revisit again and again in the future, this is a list of movies that will most likely fit that bill most.

Honorable Mention… Rise of the Planet of the Apes — A prequel to a rocky franchise about apes inheriting the earth was actually sophisticated, well directed, and emotionally charged? I’m excited to see where the revised franchise goes…

10. Source Code – The director of the acclaimed psychological thriller, Moon, takes on a more mainstream directorial approach by making a time-traveling thriller that is highly entertaining, well-acted, and thought-provoking. Just don’t over-think the ending too much…

9. Thor – This one was a surprise for me. I’ve never thought too highly of the concept of the famous comic book character (it may be the winged helmet that gets me), but Kenneth Branagh took this superhero film to the right heights to make it rise well above mediocrity into a superhero installment that is quite memorable.

8. Pirates of the Caribbean: On Stranger Tides – Jack Sparrow returns and is the focal point of this adventure. While many felt it was too much of the same, giving Jack the sole spotlight just gave the film more of what fans like best about this series — Johnny Depp’s portrayal of Jack Sparrow. It’s not a perfect sequel, but it’s fun and a nice entry into the Pirates saga that gets back to the basics after the overblown previous film.

7. Midnight in Paris – While I can’t say I’ve seen a lot of Woody Allen films, this is easily his best of what I have seen in his catalog of films. Funny, clever, romantic, and artistic, Midnight In Paris is for art lovers especially.

6. Transformers: Dark of the Moon – While Michael Bay’s Tranformers films are far, far from being art or even “great” filmmaking, they’re undeniably fun popcorn movies. I’m an 80’s baby who grew up on the original cartoon series and action figures, so to hear Peter Cullen voice the iconic Optimus Prime once again — as the robots destroy most of Chicago — is a pretty fun trip to the cinema. While the first is probably Bay’s best-made of the series, this action packed third film has just enough crazy action and wowing visuals to appeal to that 80’s baby inside. It’s flawed from head to toe, but I enjoyed it nonetheless. Here’s to hoping Bay won’t touch the much talked about forthcoming fourth film…

5. Captain America: The First Avenger – Joe Johnston directed one of my all-time favorites from the 1990’s, The Rocketeer, and takes on the superhero genre once again with this fantastic adaptation of Captain America. It’s probably the best superhero film of 2011 and one of the most fun in recent years. And I have to say it’s so refreshing to see a movie that isn’t afraid to be hopelessly patriotic in a time when it isn’t all that popular to do so.

4. Sherlock Holmes: A Game of Shadows – Guy Ritchie’s modern take on the iconic sleuth, Sherlock Holmes, was a surprise success two years ago and this first sequel is a wonderful addition to what he began in 2009. Downey and Law are a fantastic team once again and witty, fast dialog with a formidable opponent for Holmes makes this film easily rival its predecessor. Sure some of it goes over the top (especially the unexplained ending), but how often do you find a popcorn movie with such great acting and dialog?

3. Cowboys & Aliens – Jon Favreau returns with a third comic book adaptation, departing from Downey’s lead role in Iron Man and opting to take viewers to the old west… with a twist. Daniel Craig and Harrison Ford face off against aliens in this action adventure film that avoids the horrific results of the last time these genres mashed (Wild Wild West… *shudder*) and creates one heck of a fun time at the movies. And come on… James Bond versus Indiana Jones/Han Solo? Too awesome for nerds like this guy.

2. Kung Fu Panda 2 – Yup, Number two is an animated film. I caught this in the theaters in 2D and then saw it again recently in Blu-Ray. Not only is this a sequel to a great first film, but it bests its predecessor in every way. A great script with great voice acting and fantastic action make this one really fun film. The camaraderie between Po and his new found friends in his idols, the Furious Five, make this film all the more endearing to watch. And the mystery of Po’s past brings necessary heart and emotion to the film as well. It’s definitely an underrated achievement in the 2011 sea of films.

1. Mission:Impossible: Ghost Protocol – And the true popcorn movie fan emerges with the selection of my top film. While it’s risky to choose a film I recently saw and have only seen once (and on IMAX, mind you), Brad Bird’s first live action film is almost as skillfully executed and as memorable as his Pixar animated venture, The Incredibles. As Tom Cruise pushes 50 and helms his FOURTH impossible mission, Bird and Cruise have found a story worth telling in Ghost Protocol and some fantastic action (and comedy, thanks to a beefed up role for Simon Pegg) to measure. Fans of action films should be pleasantly surprised and those who look for a little more brains in such films may just be shocked to discover that the fourth Mission: Impossible is more than likely the very best yet!

2012’s looking to be another fun year at the movies, so until then… these are my 2011 top picks from a guy who… Just Loves Movies.

When You Like the Soundtrack More than the Movie…