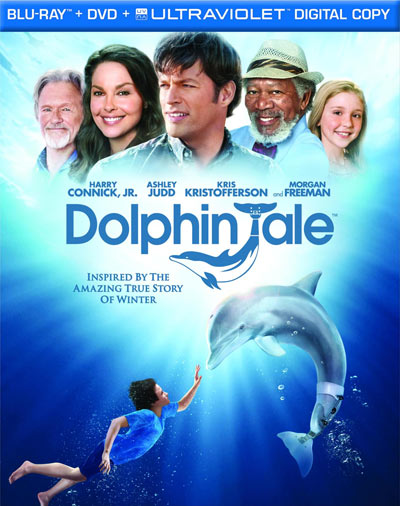 Burbank, CA, December 8, 2011 – Dive into the heartwarming, inspiring story of Winter in “Dolphin Tale,” arriving onto Blu-ray 3D Combo Pack, Blu-ray Combo Pack, DVD and Digital Download on December 20 from Warner Home Entertainment Group. Starring Harry Connick, Jr., Ashley Judd and Oscar® winner Morgan Freeman, Alcon Entertainment’s “Dolphin Tale” is inspired by the amazing true story of a brave dolphin and the compassionate people who banded together to save her life. “Dolphin Tale” is an uplifting, fun adventure about the healing bonds of family, both human and animal.

Directed by Charles Martin Smith from a screenplay by Karen Janszen and Noam Dromi, the film features Connick, Jr. as Dr. Clay Haskett, who runs the Clearwater Marine Hospital; Judd as Lorraine Nelson, a single mother; Nathan Gamble as her son, Sawyer, who frees Winter from the trap and forms a unique connection with the dolphin; Cozi Zuehlsdorff as Hazel, Clay’s daughter, who befriends Sawyer; Kris Kristofferson as Clay’s father, Reed; and Freeman (“Million Dollar Baby”) as Dr. Cameron McCarthy, who takes on the seemingly impossible task of crafting a prosthetic tail for Winter.

The Blu-ray 3D Combo Pack, Blu-ray Combo Pack and DVD include an UltraViolet Digital Copy of the standard definition theatrical version of the film, which allows consumers to download the film to a PC or Mac plus instantly stream it from a digital cloud to many computers, tablets or smartphones.

SYNOPSIS
Swimming free, a young dolphin is caught in a crab trap, severely damaging her tail. She is rescued and transported to the Clearwater Marine Hospital, where she is named Winter. But her fight for survival has just begun.

Losing her tail may cost Winter her life. It will take the expertise of a dedicated marine biologist, the ingenuity of a brilliant prosthetics doctor, and the unwavering devotion of a young boy to bring about a groundbreaking miracle—a miracle that might not only save Winter but could also help thousands of people around the world.

The real Winter, who plays herself in “Dolphin Tale,” today serves as a symbol of courage and hope to millions of people—especially those facing their own physical challenges—who have been touched by her remarkable story of recovery and rehabilitation.

On December 20, “Dolphin Tale” can be purchased for permanent download or rented on iTunes, Amazon Instant Video, and Xbox 360 and PlayStation 3 game consoles.

It will also be available to rent via kiosks and subscription on January 17.

The film is also available digitally in High Definition (HD) VOD and Standard Definition (SD) VOD from cable and satellite providers, and on select gaming consoles.