SNOWMEN ARRIVES ON DVD NOV. 29th, JUST IN TIME FOR THE HOLIDAYS 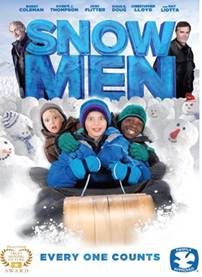 “SNOWMEN is funny, engaging, thought-provoking, meaningful, and one of the best family movies I’ve seen in a long time.”

Premiering in select theaters nationwide in October 2011, SNOWMEN was deemed the “Family Movie Event of the Year” and continues to build a lasting legacy with the DVD release.

“It has been wonderful – and rewarding – to hear the many stories of families who have seen the movie and then engaged in meaningful conversations with their children,” said Mpower Pictures CEO, Stephen McEveety (The Passion of The Christ, Braveheart). “The beauty of this film is that it speaks to people in all different stages of life, most notably with Christopher Lloyd’s powerful and timeless quote, ‘When people talk about someone living a good life, it’s not what they did that matters so much as how they did it.’”

SNOWMEN is a humorous and heartfelt coming-of-age story about three unlikely heroes and the winter that changed their lives forever. After a surprising discovery in the snow catapults three small-town boys into the spotlight, the best friends hatch a plan to be remembered forever by setting a Guinness World Records® title. Along the way, the trio battles schoolyard bullies, unites their community and discovers that – while fame may be fleeting – true friendship lasts forever.

Pre-orders for the SNOWMEN DVD can be purchased online through Walmart and Amazon.

ARC Entertainment is a “solutions based” distribution company. ARC Entertainment’s unparalleled relationships with national retailers, coupled with strong sales and marketing expertise, enables the Company to explore unique programs and business models for its content partners.

The Company develops creative and profitable retail marketing programs by connecting Intellectual Property and Content owners directly with retailers. This enables ARC Entertainment to truly align content development, investment and distribution with the requirements of retailers and their customers.

ABOUT MPOWER PICTURES
Mpower Pictures is a film production company that specializes in the financing, production, distribution, and marketing of motion picture and television content.