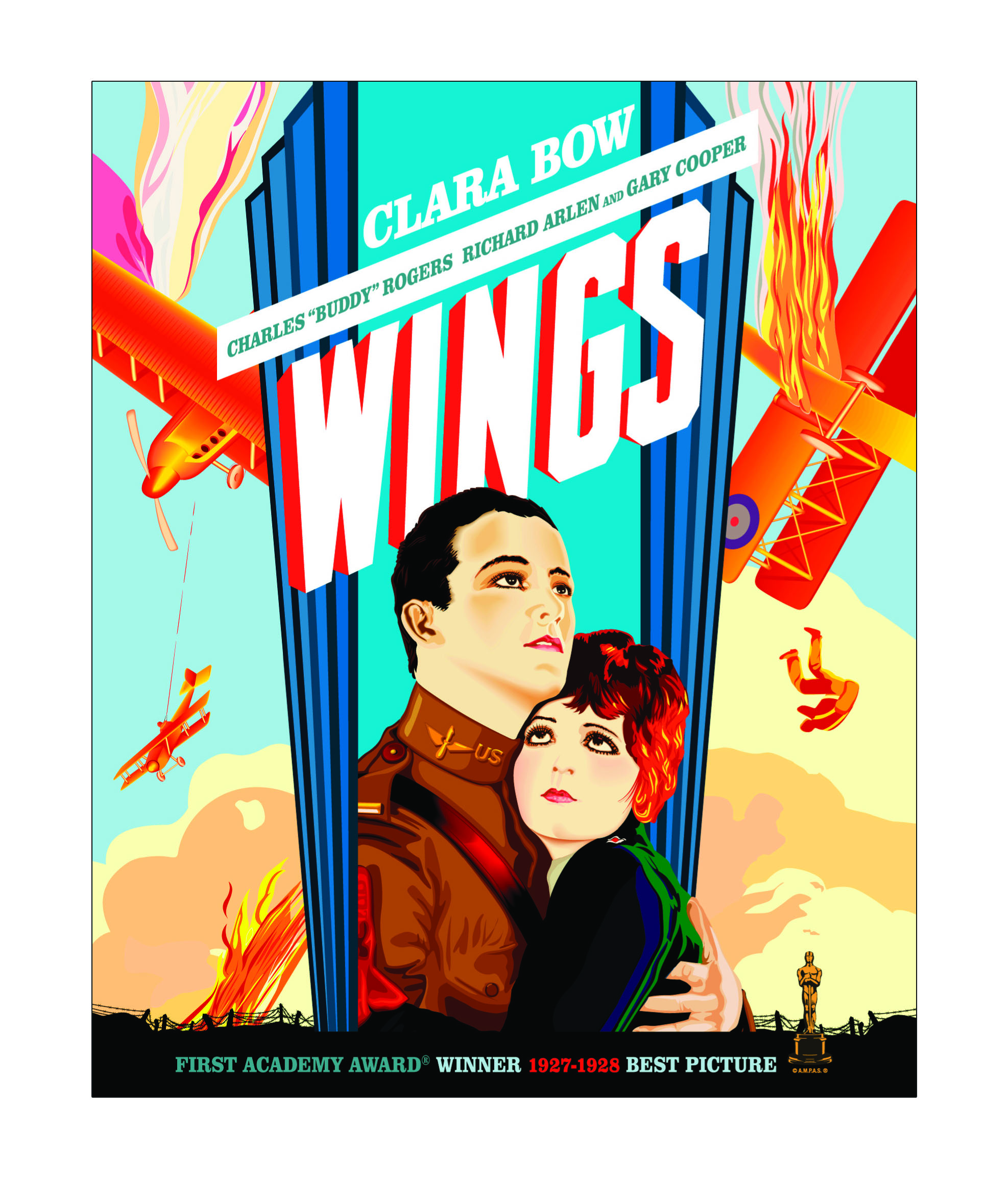 HOLLYWOOD, CALIF. – Paramount Home Entertainment kicks off the studio’s centennial celebration in 2012 by releasing the inaugural Best Picture Academy Award® winner WINGS for the first time ever on Blu-ray™ and DVD
January 24, 2012. Meticulously restored to give fans the chance to view the visually stunning epic in pristine condition, the 1927 World War I drama explores the devastating effects of war through the story of two men who go off to battle and the woman they both leave behind. Featuring groundbreaking aerial dogfights and epic battle sequences, WINGS is both a cinematic spectacle and a compelling story of love and sacrifice that effectively dramatizes the bitter wages of war. The historic piece of cinema stars Clara Bow, Charles “Buddy” Rogers and Richard Arlen, and also features Gary Cooper in one of his first feature film roles.

The filming of WINGS was a major undertaking for Paramount Pictures when it began shooting in September of 1926. Because the studio planned to make the film a major roadshow feature, executives immediately cast the top film star of the day, Clara Bow. However, director William Wellman wanted to cast lesser-known actors around Bow and ultimately chose Buddy Rogers and Richard Arlen, as well as the unknown Gary Cooper in a small, but key role.

Because of the extraordinary demands of the epic, the studio reached out to the U.S. Army for assistance and the picture was made with the cooperation of the largest garrison of troops in the U.S. at the time in San Antonio, Texas. Large-scale battlefields were built on more than five acres of land near the barracks and thousands of real-life soldiers appeared in the massive ground sequences.

For the breathtaking aerial battles, groundbreaking new film techniques were used to capture a sense of authenticity that audiences of the day had never experienced before. In fact, WINGS was one of the first films in which the actors actually went up in real planes and were able to activate the mounted cameras themselves—a brave feat for the likes of Buddy Rogers, who had never flown before.

At a time when few films cost as much as $1 million, WINGS’ budget soared to an extraordinary $2 million. But the investment paid off when the film opened and became a resounding hit, playing for over a year at its original New York engagement. And in 1929 WINGS became the first film to win the Academy Award for Best Picture, as well as a second Academy Award for Engineering Effects, now known as special effects.

Because the original negative was lost decades ago, contemporary audiences have only seen WINGS in a compromised form. The restoration process utilized a duplicate negative housed in the Paramount archive, but despite this being the best element available, the negative was beset by damage, including entire reels that were strafed with scratches and printed-in nitrate deterioration that was literally eating into the edges of the frames. Using state-of-the-art digital tools normally used to create special effects, the film was meticulously restored frame-by-frame. Original tints and effects, such as colors that were embossed onto the film strip to give flames and explosions a fiery look, were also digitally recreated based on a detailed continuity script that still existed and tinting/toning guides from the period.

For this release, the film’s original paper score was procured from the Library of Congress and recorded with a full orchestra. Like many silent film scores, the music was a combination of original composition, popular songs of the period and themes from classical music. Musicians with expertise in silent film music were chosen to recreate a truly orchestral experience.

The WINGS Blu-ray includes the new documentaries “Wings: Grandeur in the Sky,” which gives perspective on the remarkable cinematic achievements of William Wellman and his team of filmmakers; “Dogfight”, which explores the history of early aeronautics; and “Restoring the Power and Beauty of Wings”, which details the painstaking process of returning this monumental epic to its original glory.

The WINGS Blu-ray is presented in 1080p high definition with a newly-restored musical score by J.S. Zamecnik in 5.1 DTS-HD Master Audio and an organ score by Gaylord Carter in 2.0 Dolby Digital that Wings fans may be familiar with, as well as French, Spanish and Portuguese subtitles. Disc contents are as follows:

The WINGS DVD is presented in full screen with a newly-restored musical score by J.S. Zamecnik in 5.1 Dolby Digital Surround and an organ score by Gaylord Carter in 2.0 Dolby Digital, as well as French and Spanish subtitles. The disc includes “Wings: Grandeur in the Sky.”