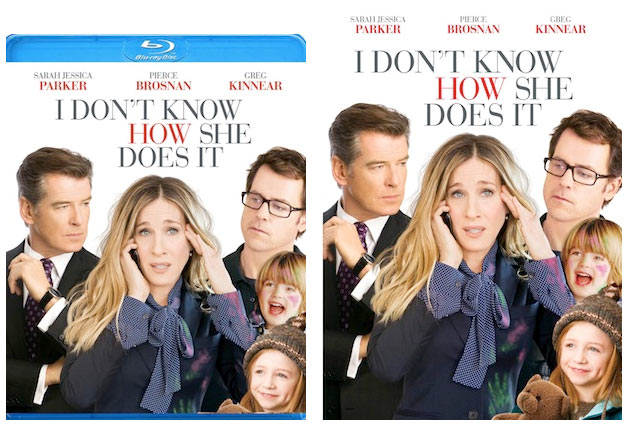 I DON’T KNOW HOW SHE DOES IT

Starring Sarah Jessica Parker, I DON’T KNOW HOW SHE DOES IT

BEVERLY HILLS, CA – Anchor Bay Entertainment and The Weinstein Company announced today the Blu-ray™ and DVD release of the highly relatable romantic comedy, I DON’T KNOW HOW SHE DOES IT, from director Douglas McGrath (Emma, Infamous) and producer Donna Gigliotti (The Reader, Let Me In). Sarah Jessica Parker (Sex and the City) leads a top-notch ensemble cast that includesPierce Brosnan (Die Another Day),Greg Kinnear (Little Miss Sunshine), Christina Hendricks (“Mad Men”), Kelsey Grammer (“Boss”), Seth Meyers (“Saturday Night Live”), and Olivia Munn (“The Daily Show with Jon Stewart”). Based on Allison Pearson’s critically acclaimed bestseller, dubbed by Oprah Winfrey as “the national anthem of working mothers,” I DON’T KNOW HOW SHE DOES IT heads to retail on January 3, 2012 for an SRP of $39.99 for the Blu-ray™ and $29.98 for the DVD.

NBC’s ‘Moms & the City’ call I DON’T KNOW HOW SHE DOES IT “a hilarious comedy about having it all” and “the perfect film for a girls night out!” The New York Daily News’ Elizabeth Weitzman describes the film as having “plenty of humor and poignancy”, while SHAPE magazine’s Karen Borsari calls it “hilarious!” Finally, New York Magazine’s David Edelstein proclaims, “Sarah Jessica Parker reminds you what an all-in, high-risk comic actress she can be.”

Trying to balance work and family is a non-stop juggling act for Kate Reddy (SarahJessica Parker). As a determined Boston-based finance executive, she devotes her day to her job and her night to her adoring husband Richard (Greg Kinnear) and their two young children. In between conference calls, meetings, deadlines, and her daughter’s school bake sale, Kate manages to survive on a daily basis. But when she gets handed a major new account that will require frequent trips to New York, and Richard also wins the new job he’s been hoping for, both will be spreading themselves even thinner. Complicating matters is Kate’s charming new business associate Jack Abelhammer (Pierce Brosnan), a handsome executive whose unexpected emotional support becomes a source of refuge.

The I DON’T KNOW HOW SHE DOES IT Blu-ray™ and DVD bonus features include a conversation with bestselling author, Allison Pearson. Note: Special features are subject to change.

Learn more about I DON’T KNOW HOW SHE DOES IT at: http://howshedoesitmovie.com/

The Weinstein Company (TWC) is a multimedia production and distribution companylaunched in October 2005 by Bob and Harvey Weinstein, the brothers who founded Miramax Films in 1979. TWC alsoencompasses Dimension Films, the genre label founded in 1993 by Bob Weinstein, which has released such popular franchises as SCREAM, SPY KIDS and SCARY MOVIE. Together TWC and Dimension Films have released a broad range of mainstream, genre and specialty films that have been commercial and critical successes, including Tom Hooper’s THE KING’S SPEECH, winner of four 2011 Academy Awards®, including Best Picture.

Since 2005, TWC and Dimension Films have released such films as GRINDHOUSE; I’M NOT THERE; THE GREAT DEBATERS; VICKY CRISTINA BARCELONA; THE READER; THE ROAD; HALLOWEEN; THE PAT TILLMAN STORY; PIRANHA 3D; INGLOURIOUS BASTERDS; A SINGLE MAN; BLUE VALENTINE; THE COMPANY MEN; MIRAL; SCRE4M; and SUBMARINE. Currently in release are DIRTY GIRL; I DON’T KNOW HOW SHE DOES IT; OUR IDIOT BROTHER; APOLLO 18; SPY KIDS: ALL THE TIME IN THE WORLD IN 4D; and SARAH’S KEY. Upcoming releases include MY WEEK WITH MARILYN, PIRANHA 3DD; THE ARTIST; W.E.; and THE IRON LADY.

TWC is also active in television production, with credits including the Emmy® nominated and Peabody Award winning reality series Project Runway, the VH1 reality series Mob Wives, and the critically acclaimed HBO comedy/crime series The No. 1 Ladies Detective Agency which also received a Peabody Award. The company is currently producing After The Runway, Project Runway All Stars and Project Accessory. The company currently has 17 series in different stages of development, including Marco Polo, a scripted historical series about the great explorer, for Starz; and The Nanny Diaries,being adapted for ABC by Amy Sherman Palladino (Gilmore Girls).

I DON’T KNOW HOW SHE DOES IT BLU-RAY™

I DON’T KNOW HOW SHE DOES IT DVD