ONE SMALL STEP FOR MICKEY…ONE GIANT LEAP FOR THE CLUBHOUSE! 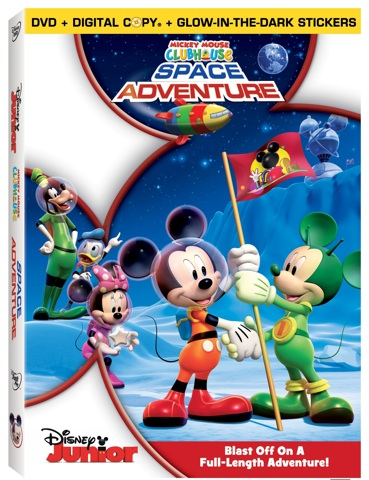 BURBANK, Calif., June 24, 2011 – This November, parents and their preschoolers are invited to blast off with Mickey and pals on a rocketship full of fun in Walt Disney Studios Home Entertainment’s newest release of Mickey Mouse Clubhouse: Space Adventure, a new, full-length intergalactic adventure that takes the Mickey Mouse Clubhouse gang – Mickey, Minnie, Donald, Goofy and Daisy – into outer space on a search for the ultimate space treasure. Packaged with a surprise, never-before-seen “Goofy’s Thinking Cap” episode and fun, glow-in-the-dark space-themed stickers, Mickey Mouse Clubhouse: Space Adventure will be available for purchase as a 2-Disc (DVD + Digital Copy) Combo Pack November 8, 2011.

Mickey Mouse Clubhouse: Space Adventure is a 45 minute, full-length space-themed escapade, geared for kids 2 to 5 years of age, that invites young viewers to discover outer space and use their problem-solving skills while they watch. In this specific adventure, Mickey and pals head to space where they tour the Moon, Mars and the Rings of Saturn as well as meet new alien friends while on the hunt for a unique space treasure. This exciting release will be available for purchase as a 2-Disc (DVD + Digital Copy) Combo Pack (the ultimate “2-for-1” value) for the suggested retail price of $19.99 U.S./$24.99 Canada. It’s an out-of-this-world package the kids won’t want to miss!

About Mickey Mouse Clubhouse:
Mickey Mouse Clubhouse is a children’s television series, that premieres on Disney Channel, and is intended to help children solve specific age-appropriate problem solving skills, such as identifying shapes, counting, memory and cartoon physics. The series uses cognitive, social and creative learning opportunities. The premise of each episode centers on some kind of problem that Mickey has to solve, or event he needs to prepare for. To reach his goals, he frequently enlists his viewers to help him solve the problem by either counting out loud and/or identifying something on the television screen.

Synopsis:
It’s Adventure Day and Professor Von Drake is sending Mickey and pals into the far reaches of outer space. The team blasts off in their Clubhouse Rocket in search of Treasure Stars that will point the way to the Out-of-this-World Treasure, their ultimate goal. The interplanetary trip takes preschool viewers first to the Moon, Mars and the Rings of Saturn. Along the way, the gang gets help from friendly space aliens Moon Men Chip and Dale, Martian Mickey and Pluto from Pluto but they also encounter sneaky Space
Pirate Pete, who wants the Treasure all for himself. Eventually the Clubhouse Rocket’s crew and Space  Pirate Pete manage to become friends, and they all follow the trail of the Treasure Stars to the mysterious Planet Mickey where they discover the location of the Out-of-this-World Treasure. It turns out to be a futuristic, space age version of the Clubhouse — the perfect meeting place for all pals across the universe!