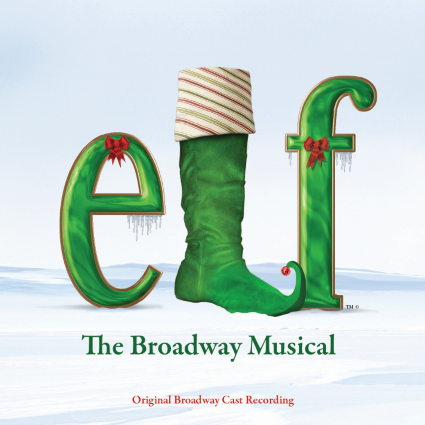 The cast album was produced by David Lai and Matthew Sklar, and recorded and mixed by Isaiah Abolin. The CD booklet contains ELF’s full album lyrics and special liner notes by Sheldon Harnick (lyricist Fiddler on the Roof).  ELFis the hilarious tale of Buddy, a young orphan who mistakenly crawls into Santa’s bag of gifts and is transported to the North Pole. Buddy is raised unaware that he is actually a human, until his enormous size and poor toy-making abilities cause him to face the truth. With Santa’s permission, Buddy embarks on a journey to New York City to find his birth father and discover his true identity. Faced with the harsh reality that his father is on the naughty list and his step-brother doesn’t even believe in Santa, Buddy is determined to win over his new family and help New York remember the true meaning of Christmas. ELF opened on Sunday, November 14th, 2010, at the Al Hirschfeld Theatre.  Previews began Tuesday, November 2nd .  ELF was produced on Broadway by Warner Bros. Theatre Ventures in association with Unique Features

ELF The Broadway MusicalTrack List:
1) Overture
2) Christmastown
3) World’s Greatest Dad
4) In The Way
5) Sparklejollytwinklejingley
6) I’ll Believe In You
7) In The Way – Reprise
8) Just Like Him
9) A Christmas Song
10) World’s Greatest Dad – Reprise
11) Nobody Cares About Santa
12) Never Fall In Love (With An Elf)
13) There Is A Santa Claus
14) The Story Of Buddy The Elf
15) Nobody Cares About Santa – Reprise
16) A Christmas Song – Reprise
17) Finale

PRESS RAVES
“A SPLASHY, PEPPY, SUGAR-SPRINKLED HOLIDAY ENTERTAINMENT!
The score is polished and hummable. Chad Beguelin’s lyrics have a bright comic zest and are well-matched to Matthew Sklar’s gently swinging music. Their boogie-woogie “Nobody Cares About Santa” is a rowdy parody of the rival Rockettes show at Radio City.Bookwriters Bob Martin and Thomas Meehan follow the film’s screenplay but also stuff it with some decent jokes, boosting the fruitcake with extra nuts.”
—Charles Isherwood, The New York Times

“ENDEARINGLY GOOFY!
Even if you haven’t seen the movie, director/choreographer Casey Nicholaw and his game, nimble cast allow us to enjoy the ride.” —Elysa Gardner, USA Today

“ELF IS HAPPY ENOUGH FOR FAMILIES, SAVVY ENOUGH FOR CITY KIDS AND PLENTY SMART FOR ADULTS!
Casey Nicholaw’s staging successfully retains the many charms of the movie, and his choreography is filled with delightful touches. The creators have taken a highly enjoyable film and enhanced it for theatre audiences.”
—Steven Suskin, Variety

“WHO NEEDS WILL FERRELL?
ELF, the musical, stands on its own with great sets and design, a funny adapted script, and a top-notch behind-the-scenes creative team featuring songs by Matthew Sklar and Chad Beguelin and a book by Tony® winners Thomas Meehan and Bob Martin. They’re only the top of a talented group that also includes David Rockwell’s set designs and Gregg Barnes costumes. The production is a tight, polished affair that has enough jokes for adults and enough special effects for the kids.” —Mark Kennedy, Associated Press

“Even the biggest Cotton-Headed-Ninny-Muggins will leave the theatre with A WARM FESTIVE GLOW!
Offering a stockingful of pleasantly melodic tunes, some humorous modern flourishes and a sugarplummy supporting cast, ELF is a sleigh-length ahead of recent seasonal fare on Broadway.”
—Thom Geier, Entertainment Weekly

About Sh-K-Boom/Ghostlight Records
Sh-K-Boom with its imprint Ghostlight Records has become the leading independent force in Original Broadway Cast Recordings – building a library of over 100 records the last 10 years, featuring the most successful Broadway musicals and solo albums by Broadway’s biggest stars. Founded by Kurt Deutsch and wife Sherie Rene Scott, the label was created by and for the Broadway community and has garnered acclaim not only for their high-quality recordings, but for their innovative marketing techniques and efforts to reach the next generation of Broadway music fans via iTunes, social networking, music videos and more. Ghostlight recently celebrated a major milestone with their release of The Book of Mormon, which became the first Broadway cast recording to break into Billboard’s Top 10 (topping out at #3) since the original 1969 release of Hair, as well as taking its place as the biggest-selling digital release of a cast recording of all time. Also just released on the label are the OCRs of Catch Me If You Can, Sister Act andWomen on the Verge of a Nervous Breakdown, as well as solo albums from some of Broadway’s biggest stars: Sutton Foster, Kelli O’Hara, Alice Ripley, Christine Ebersole, Melissa Errico and Ben Vereen. In recent Broadway seasons, Ghostlight has preserved the scores of some of Broadway’s most well-known musicals, including the Grammy Award-winning In the Heights, plus Next to Normal, Hair, Bloody Bloody Andrew Jackson, Legally Blonde, Everyday Rapture, Passing Strange, Dirty Rotten Scoundrels, The 25th Annual Putnam County Spelling Bee and The Drowsy Chaperone. Coverage of their albums has ranged from Rolling Stone to USA TODAY to The New York Times, from Blender Magazine to Playbill to Billboard, and many more. The company is recognized for reinventing the musical theatre recording landscape, and creating a new type of ‘United Artists’ environment for Broadway producers and artists to participate in the funding and co-ownership of their albums.

ABOUT WARNER BROS. THEATRE VENTURES
Warner Bros. Theatre Ventures(Mark Kaufman and Raymond Wu, Executive Vice Presidents) is the live stage play division of Warner Bros. Entertainment and responsible for developing and producing world-class musicals and other stage productions for the Studio.  The division currently has multiple licensed properties in production worldwide and more than a dozen other projects in various stages of development, including co-productions with award-winning Broadway and film producers. WBTV’s parent company, WARNER BROS. ENTERTAINMENT, a Time Warner Company, is a fully integrated, broad-based entertainment company and a global leader in the creation, production, distribution, licensing and marketing of all forms of creative content and their related businesses, across all current and emerging media and platforms.  The company stands at the forefront of every aspect of the entertainment industry from feature film, TV and home entertainment production and worldwide distribution to DVD, digital distribution, animation, comic books, licensing and broadcasting.

(Music)received a Tony® Award nomination (Best Original Score) and a Drama Desk nomination (Outstanding Music) for his work on The Wedding Singer. He co-produced the show’s original Broadway cast recording for Sony/BMG Masterworks Broadway. Matthew is a recipient of the Gilman & Gonzalez-Falla Musical Theatre Award and the Jonathan Larson Performing Arts Foundation Award. In addition to his work as a composer, Matthew has been a pianist, conductor and/or arranger for more than a dozen Broadway productions including Shrek; Caroline, or Change; Nine; 42nd Street; Titanic; Miss Saigon; and Les Misérables. He has also contributed original music to the hit Nickelodeon television series Wonder Pets.

ELF is the hilarious tale of Buddy, a young orphan child who mistakenly crawls into Santa’s bag of gifts and is transported back to the North Pole.  Buddy is raised unaware that he is actually a human, until his enormous size and poor toy-making abilities cause him to face the truth.  With Santa’s permission, Buddy embarks on a journey to New York City to find his birth father and discover his true identity.  Faced with the harsh reality that his father is on the naughty list and his step-brother doesn’t even believe in Santa, Buddy is determined to win over his new family and help New York remember the true meaning of Christmas.  This modern day Christmas classic is sure to make everyone embrace their inner ELF.