SPY KIDS: ALL THE TIME IN THE WORLD

The Fourth Film In The Popular SPY KIDS Film Franchise, SPY KIDS: ALL 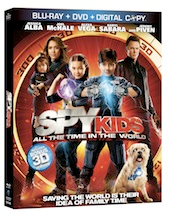 The action packed franchise is back…with the next generation of Spy Kids! Marissa Cortez Wilson (Jessica Alba) has it all: married to a famous spy-hunting television reporter (Joel McHale), with a new baby and intelligent twin step kids, Rebecca (Rowan Blanchard) and Cecil (Mason Cook). When the maniacal Timekeeper (Jeremy Piven) disrupts her domestic bliss—threatening to take over the planet—Marissa comes out of retirement as a top secret agent. With Armageddon quickly approaching, Rebecca and Cecil are thrust into action! With a little help from some familiar Spy Kids friends, Carmen (Alexa Vega), Juni (Daryl Sabara), their faithful dog Argonaut (Ricky Gervais) and some mind-blowing gadgets, they just may be able to save the world!

The SPY KIDS: ALL THE TIME IN THE WORLD Blu-ray™ and DVD bonus features include an interview with director Robert Rodriguez; a “Spy Kids Passing the Torch” featurette; a “Spy Gadgets” clip; deleted scenes; and more! Note: Special features are subject to change.

Learn more about SPY KIDS: ALL THE TIME IN THE WORLD at: www.spykidsmovie.net

The Weinstein Company (TWC) is a multimedia production and distribution company launched in October 2005 by Bob and Harvey Weinstein, the brothers who founded Miramax Films in 1979. TWC also encompasses Dimension Films, the genre label founded in 1993 by Bob Weinstein, which has released such popular franchises as SCREAM, SPY KIDS and SCARY MOVIE. Together TWC and Dimension Films have released a broad range of mainstream, genre and specialty films that have been commercial and critical successes, including Tom Hooper’s THE KING’S SPEECH, winner of four 2011 Academy Awards®, including Best Picture.

Since 2005, TWC and Dimension Films have released such films as GRINDHOUSE; I’M NOT THERE; THE GREAT DEBATERS; VICKY CRISTINA BARCELONA; THE READER; THE ROAD; HALLOWEEN; THE PAT TILLMAN STORY; PIRANHA 3D; INGLOURIOUS BASTERDS; A SINGLE MAN; BLUE VALENTINE, THE COMPANY MEN; MIRAL; SCRE4M; and SPY KIDS 4: ALL THE TIME IN THE WORLD IN 4D. Currently in release are I DON’T KNOW HOW SHE DOES IT, OUR IDIOT BROTHER and APOLLO 18. Upcoming releases include DIRTY GIRL, MY WEEK WITH MARILYN and THE ARTIST. Recently wrapped is COGAN’S TRADE.

TWC is also active in television production, with credits including the Emmy® Award-winning hit reality series “Project Runway,” the new VH1 reality series “Mob Wives,” and the critically acclaimed HBO comedy/crime series “The No. 1 Ladies Detective Agency.” The company is producing three “Project Runway” spinoffs, “Project Runway All Stars,” “Project Runway: Masters” and “Project Runway: Accessories,” which are expected to debut in 2011. The company currently has 17 series in different stages of development, including: “Marco Polo,” a scripted historical series about the great explorer; “The Nanny Diaries,” based on the hit book; and “The Mad Ones,” adapted from the Mafia novel of the same name.

SPY KIDS: ALL THE TIME IN THE WORLD BLU-RAY™ COMBO PACK

SPY KIDS: ALL THE TIME IN THE WORLD DVD