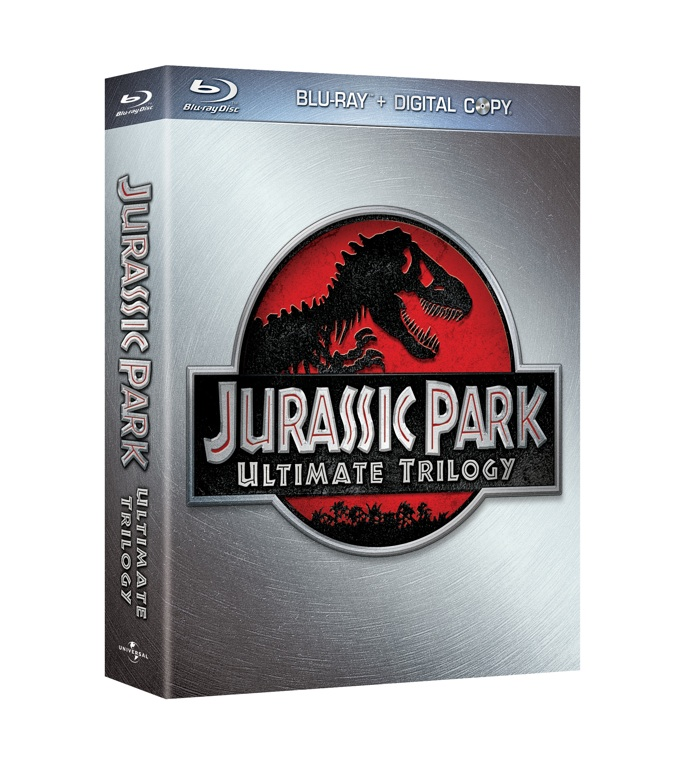 NEWS SOURCE: Click Comm
Universal City, California, June 27, 2011 – The wait is finally over to experience one of the most anticipated motion-picture trilogies of all time like never before when Jurassic Park, The Lost World: Jurassic Park and Jurassic Park III debut as a trilogy set on Blu-ray™ October 25, 2011 from Universal Studios Home Entertainment. Acclaimed filmmaker Steven Spielberg’s award-winning cinematic franchise, based on the best-selling book by Michael Crichton, generated nearly $2 billion combined at the worldwide box office and featured groundbreaking visual effects that changed the art of movie-making forever. Now, all three epic films have been digitally restored and remastered in flawless high definition for the ultimate viewing experience. Additionally, the films’ visceral sound effects and the unforgettable music from legendary composer John Williams can now be heard in pristine 7.1 surround sound. Arriving in stores just in time for holiday gift giving, this collectible three-movie set also features hours of bonus features, including an all-new, six-part documentary and digital copies of all three films that can be viewed on an array of electronic and portable devices anytime, anywhere. The Jurassic Park Ultimate Trilogy is also available on DVD, as well as in a spectacular Limited Edition Blu-ray Trilogy Gift Set which includes a custom T-rex dinosaur statue.

“From the moment T-Rex first towered over worldwide movie audiences, the Jurassic Park Trilogy has electrified fans with its heart-pounding action and awe-inspiring technological innovations,” says Craig Kornblau, President of Universal Studios Home Entertainment. “With this newly remastered and digitally restored edition, we continue the franchise’s legacy by delivering to home viewers spectacular picture and sound that keeps the films as fresh and visceral now as they were when audiences first experienced them.”

o Dawn of a New Era

o The Next Step in Evolution

· BD-LIVE™ – Access the BD-Live™ Center through your Internet-connected player to watch exclusive content, the latest trailers, and more!

o VIDEO TIMELINE: Users can easily bring up the video timeline, allowing them to instantly access any point in the film.

o MOBILE-TO-GO: Users can unlock a selection of bonus content with their Blu-ray™ discs to save to their device or to stream from anywhere there is a Wi-Fi network, enabling them to enjoy content on the go, anytime, anywhere.

o BROWSE TITLES: Users will have access to a complete list of pocket BLU™-enabled titles available and coming to Blu-ray™. They can view free previews and see what additional content is available to unlock on their device.

o KEYBOARD: Entering data is fast and easy with your device’s intuitive keyboard.

The following bonus features also appear on the both the Blu-ray™ and DVD:

From Academy Award-winning filmmaker Steven Spielberg, the Jurassic Park Ultimate Trilogy is one of the most successful film franchises in worldwide box-office history. On a remote tropical island, an amazing living theme park becomes a game of survival for humans foolhardy enough to set foot on it. Meticulously recreated dinosaurs spring to astonishing life as the film’s breathtaking special effects and thrilling action sequences keep audiences on the edge of their seats. Each chapter of the history-making saga delivers even more action and spectacular visual effects than its predecessor, as nature’s ultimate killing machines once again rule the earth. Almost 20 years after its inception, the Jurassic Park Trilogy remains an unmatched cinematic experience.


Jurassic Park
A multimillionaire (Richard Attenborough) unveils a new theme park where visitors can observe dinosaurs cloned using advanced DNA technology. But when an employee tampers with the security system, the dinosaurs escape, forcing the visitors to fight for their survival. Sam Neill, Jeff Goldblum and Laura Dern star in this thrilling, action-packed blockbuster from acclaimed director Steven Spielberg and based on the novel by Michael Crichton.

Jurassic Park III
In need of funds for research, Dr. Alan Grant (Sam Neill) accepts a large sum of money to accompany Paul and Amanda Kirby (William H. Macy and Tea Leoni) on an aerial tour of the infamous Isla Sorna. It isn’t long before all hell breaks loose and the stranded wayfarers must fight for survival as a host of new — and even more deadly — dinosaurs try to make snacks of them. Laura Dern, Michael Jeter, Alessandro Nivola and Trevor Morgan co-star.

The JURASSIC PARK BD trailer in HD is now live on YOU TUBE at:
http://www.youtube.com/watch?v=TOrOTlOgflM