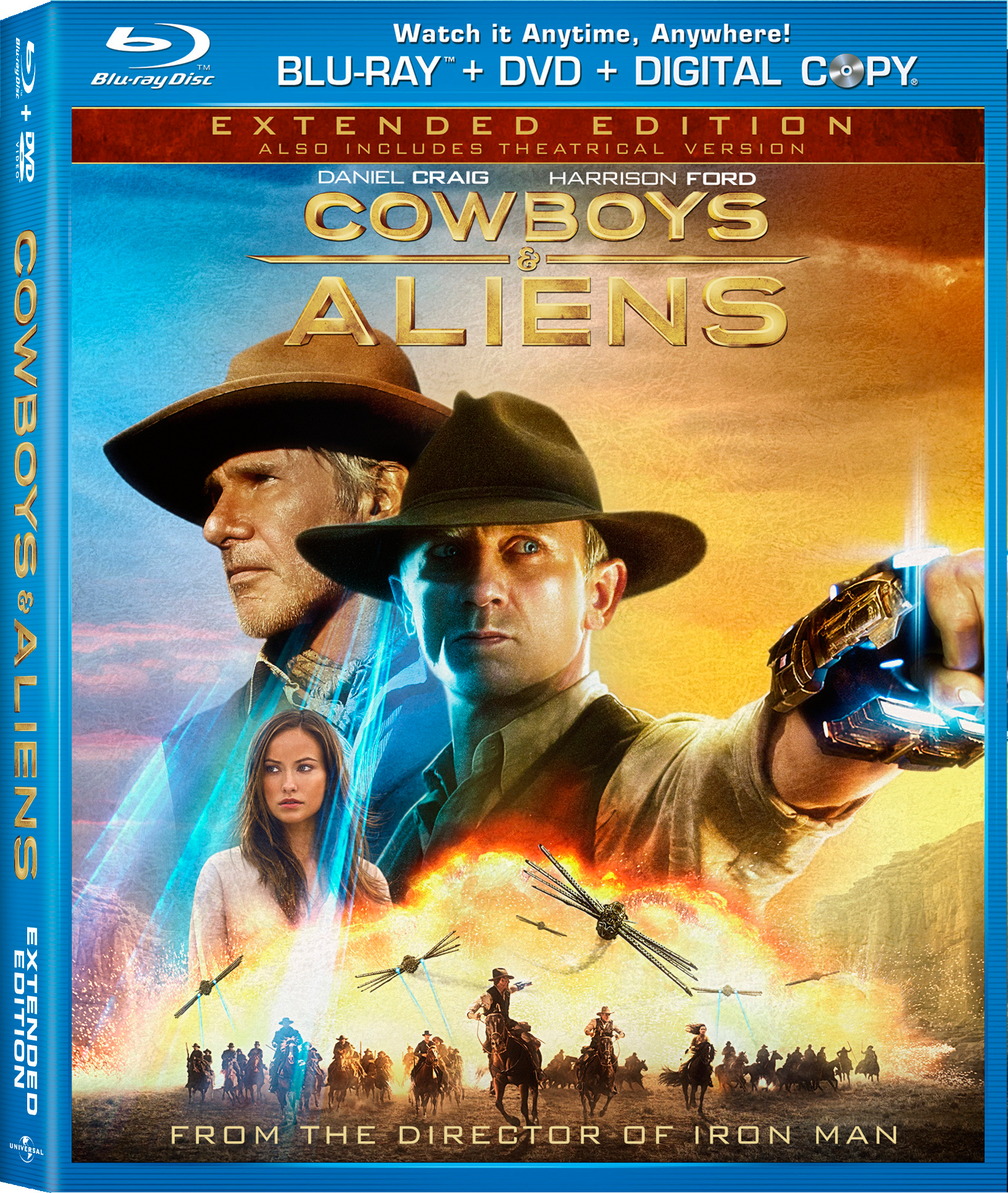 own the extended edition movie
only on blu-ray™ combo pack december 6, 2011
featuring exclusive bonus features & a dvd and digital copy of the film, plus universal’s enhanced new second screen feature

Universal City, October 5, 2011 – This summer’s movie event becomes the holiday season’s must-own Blu-ray™ as a lone gunslinger leads an uprising against an alien threat in the explosive, stunningly-imagined film, Cowboys & Aliens. A blazingly original, cross-genre adventure from acclaimed director Jon Favreau (Iron Man, Iron Man 2) and top moviemakers Steven Spielberg, Ron Howard, Brian Grazer, Alex Kurtzman and Roberto Orci, Cowboys & Aliens features heart-pumping action, spectacular visuals and a first-rate cast. Arriving in stores December 6th from Universal Studios Home Entertainment, the Blu-ray™ Combo Pack edition of Cowboys & Aliens bring all of the thrills and fun home with perfect hi-def picture and perfect hi-def sound and includes a never-before-seen extended version of the movie, over two hours of exclusive bonus features, and a DVD and digital copy of the film that can be viewed anywhere, anytime on an array of devices including laptops, tablets, Internet-connected TVs and set-top boxes. The Blu-ray™ also boasts an upgraded version of Universal’s Second Screen—a groundbreaking new technology that enhances the viewing experience by allowing viewers to simultaneously control and interact with the film and bonus material on a WiFi-connected tablet or computer as the movie plays on the television screen. The new Flick View Feature will allow fans to interact even more with the movie and be able to move content from their tablet to their TV screen! Cowboys & Aliens is also available on DVD, digital download and On Demand.

· IGNITING THE SKY: THE MAKING OF COWBOYS & ALIENS —A comprehensive, behind-the-scenes look at the production that invites viewers on set to meet the filmmakers and cast as they create this one-of-a-kind action film. In revealing conversations, Jon Favreau, Steven Spielberg, Ron Howard and Brian Grazer, as well as stars Harrison Ford, Daniel Craig and Olivia Wilde, share their insights about the movie. Also featured are visual-effects powerhouses Legacy Effects and ILM, which join forces once again to push the technological envelope beyond anything ever seen before on screen. It includes:

o FINDING THE STORY — Cowboys & Aliens, based on the graphic novel by Scott Mitchell Rosenberg, has been in development for over a decade. Filmmakers, writers and cast explain why this particular team of Hollywood heavyweights hit the right note to bring this to the big screen.

o THE SCOPE OF THE SPECTACLE —A look at the team behind the camera for the film’s massive New Mexico shoot, as the stars ride horses, shoot guns, jump from explosions, and get yanked 80 feet in the air! Director Jon Favreau stages unforgettable action set-pieces as cameras capture every moment, while legendary stuntman and Cowboys & Aliens’ second unit director Terry Leonard brings a lifetime of experience to the big-screen stunts, from legendary moments in John Wayne classics to doubling for Harrison Ford in Raiders of the Lost Ark.

o OUTER-SPACE ICON — Take a closer look at the creation of a new, terrifying alien design from Legacy Effects and Industrial Light and Magic.

And exclusive to Blu-ray™ these additional segments:

o A CALL TO ACTION — A profile of prolific actor, writer and director Jon Favreau featuring on-set video diaries shot throughout the production.

o ABSOLUTION — A look at the practical re-creation of a dusty Old West mining town, the town’s inhabitants and the amazing ensemble of actors who portray them, as well as an exclusive look at the film’s meticulous production and costume designs.

· pocket BLU™ App: The popular free pocket BLU™ app for smartphones is now even better with newly updated versions for iPad®, Android™ tablets, PC, and Macintosh computers, with features made especially to take advantage of the devices’ larger screens and high resolution displays.

o Video Timeline: Users can easily bring up the video timeline, allowing them to instantly access any point in the film.

o Mobile-To-Go: Users can unlock a selection of bonus content with their Blu-ray™ discs to save to their device or to stream from anywhere there is a Wi-Fi network, enabling them to enjoy content on the go, anytime, anywhere.

o Browse Titles: Users will have access to a complete list of pocket BLU™-enabled titles available and coming to Blu-ray™. They can view free previews and see what additional content is available to unlock on their device.

o Keyboard: Entering data is fast and easy with your device’s intuitive keyboard.

o And with UNIVERSAL’S SECOND SCREEN, viewers can enjoy an innovative and interactive viewing experience, that allows them to control, interact and explore Cowboys & Aliens with groundbreaking new features right on a networked tablet or computer, in synchronization with the movie on the television screen! While the movie plays, experience features such as:

§ Flick View: Interact with the movie, move content from the Tablet to the TV screen, and compare storyboards, animatics, and other executing content by “Flicking” them from on their tablet to their TV screen, simply by gesturing their fingers upwards on their tablets.

§ Behind the Scenes: Viewers get an all access look at the making of the film featuring interviews with cast and crew.

§ Storyboards: Viewers will be able to take a closer look at the storyboards created for some of the amazing sequences in the film.

§ 3D Models: Viewers can take a look at the aliens and otherworldly gadgets in Cowboys & Aliens by the touch or swipe of their fingers. You can move the models in a 360 degree view, get tech specs and more.

SYNOPSIS
It’s 1873 when gunslinger Jake Lonergan (Daniel Craig) awakens in the Arizona desert with no memory of his past and a mysterious metal shackle encircling his wrist. Stumbling into the nearby town of Absolution, Lonergan discovers a tightly closed community that takes its orders from the iron-fisted Colonel Woodrow Dolarhyde (Harrison Ford) — and Dolarhyde has a bone to pick with Lonergan. But the colonel’s influence wanes when the desolate city is attacked by monsters that drop from the sky with blinding force and abduct the helpless townsfolk one by one. As Lonergan’s memory slowly returns, he realizes he holds a secret that could give the town a fighting chance against the alien force. With the help of mysterious beauty Ella (Olivia Wilde), he assembles a posse comprised of former opponents: townsfolk, Dolarhyde and his boys, outlaws and Apache warriors. United against a common enemy, they prepare for an epic showdown for survival.