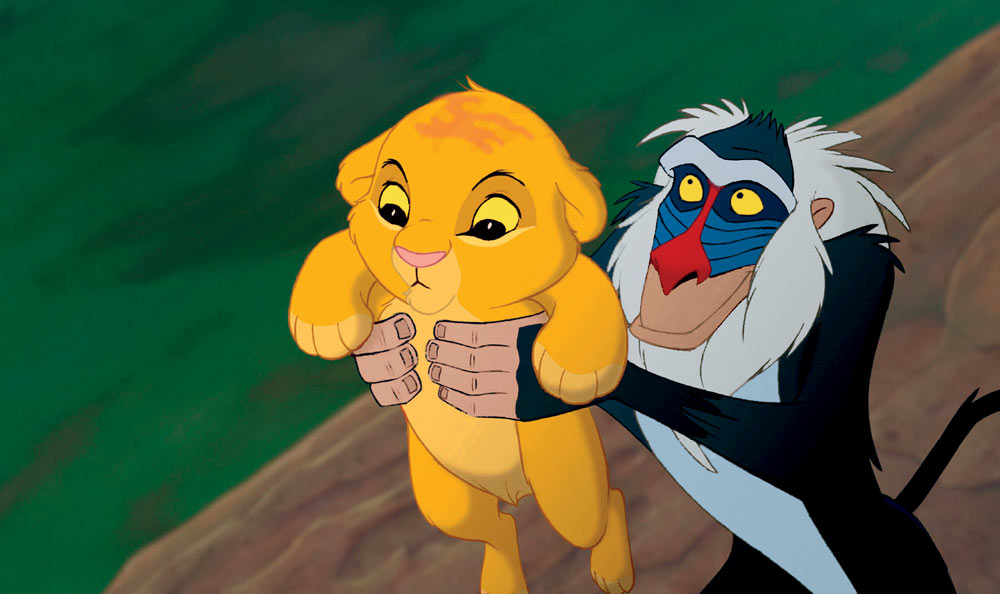 How did you become involved with The Lion King?

ROB MINKOFF: I started working at Disney in 1983. I started as an animator, but then I directed a couple of Roger Rabbit shorts that came out after the feature, Who Framed Roger Rabbit. I was in line to direct a movie for Disney and there were discussions about me doing Beauty And The Beast, but that didn’t happen. The next project was The Lion King.

ROGER ALLERS: I had worked at Disney for years in a story capacity on a lot of features, so I showed an interest in directing. After I completed my work on Beauty And The Beast, Jeffrey Katzenberg approached me to direct The Lion King, and I jumped in with both feet. It was a very exciting project for me.

Why were there two directors?

ROGER ALLERS: It’s a very common thing to have two directors on a Disney movie. They like to have director teams because there are so many different aspects of the film that need to be overseen during a very short period of time. A two-year production schedule might not sound like a short time to anybody else, but there’s a lot of work to be done, so Rob and I divided up the movie into sequences. We were then in charge of our own sequences in terms of overseeing all the animators and the layout backgrounds. It was a very creative way of working.

What thoughts went through your mind when you heard that The Lion King was going to be converted into 3D?

ROGER ALLERS: The first thing that came to my mind was, ‘How are they going to do that?’ I didn’t have a clue how a 2-dimensional movie could be translated into 3D. It was certainly an eye-opening process for me.

What did the process involve?

ROB MINKOFF: Initially, [The Lion King producer] Don Hahn, Roger and I had a meeting with a Disney Stereographer named Robert Neuman. At that first meeting, Robert showed us some of the techniques they were going to use to convert the movie.  We also came in to review the 3D footage at a number of points throughout the process. I thought it was wonderful that the original filmmakers were involved conceptually from the very beginning. And I was delighted when I finally saw the finished product in 3D because it didn’t lose any of its power, integrity or charm. I think the film works really well in 3D.

What does the 3D element add to the finished film?

What does The Lion King mean to you?

ROGER ALLERS: It’s very emotional for me to look back at The Lion King. When I started work on the movie, it was the first time in my career that I was involved in all aspects of the production of a film. It was creatively satisfying and challenging. It was one of the most exciting times of my career.

ROB MINKOFF: It was also my first opportunity to direct a film, so The Lion King means a lot to me in that regard. It’s crazy how long ago we made this film and it’s fantastic to be able to re-live it again with this new release.

What were your main challenges when you made The Lion King all those years ago?

ROB MINKOFF: The main challenge creatively was to tell an anthropomorphic story about animals. I think the level of anthropomorphism in the film exceeds many of its predecessors, which is something we were very proud of. We decided to take a different approach to other movies like Bambi, which was very naturalistic. Our characters had a more human feel to them; especially characters like Timon and Rafiki. Despite being animals, they look and act very human indeed.

What other challenges did you face?

ROGER ALLERS: Another challenge was the fact that The Lion King was an original story, so we had nothing to base it on. The story evolved as we went along, but there was also a great time pressure on us. We had a limited amount of time to finish the project, but we got there in the end.

How much did the story of The Lion King change during the production of the movie?

ROGER ALLERS: All movies change during the production process, and The Lion King was no different. Originally, the movie was going to be called King Of The Jungle, but that soon became The Lion King. When that change occurred, a number of the characters in the story changed.

Can you give us some examples?

ROGER ALLERS: Originally, Timon and Pumbaa were friends of Simba and Nala when they were children. They all used to play around the water hole together. However, we made the decision for Simba and Nala to be more authentic to a lion pride. They wouldn’t be playing around with their potential prey, so we took Timon and Pumbaa out of the first part of the movie and we made them outcasts.

ROB MINKOFF: The character of Rafiki also changed radically. He became a shaman in the film, but originally he was described as an elder statesman. He was a counselor to Mufasa, but then we changed him to be more of a spiritual character.

What was the original idea for the movie?

ROGER ALLERS: The movie was always going to be about the son of a lion king. The king was going to die, and the son would have to make his way back to reclaim his throne. That idea was there from the beginning – and it’s still there today.

How much animal research did you do for the movie?

ROGER ALLERS: We visited several areas of Kenya and we had two wonderful local guides who were very knowledgeable. We would drive out to the savannah in open-topped vehicles to observe the animals – but there wasn’t much sketching because the animals were far too quick. Instead, we took loads of photographs.

How much did the Kenyan tour influence the movie?

ROGER ALLERS: It was a huge influence. Some of our ideas about what kind of animals the characters were going to be altered when we saw them in the wild. Plus, being exposed to the language of Swahili also had a big influence on the picture. That’s where we learned the expression ‘Hakuna Matata’.

Did most of the animators go on the research trip?

ROB MINKOFF: No. Only a few people went to Kenya, but they brought back plenty of research material for everyone to study. It was great to get a feel for the landscape, the animals and the plants of the country through their photos and drawings.

How did Elton John and Tim Rice become involved with the movie?

ROGER ALLERS: We were finishing Beauty And The Beast when [lyricist] Howard Ashman sadly passed away. This was just before Aladdin went into production, although much of the music of the movie had already been written. Tim Rice was asked to step in and be the lyricist on a couple of songs for Aladdin, which he agreed to do. Of course, Tim and Alan Menken then went onto write the Oscar-winning Aladdin song, A Whole New World, so the studio was very happy with his work.

ROB MINKOFF: The Lion King was the next movie in production, so Disney asked if Tim would work on it. In our very early meetings, he proposed using Elton John, who was a good friend of his. That’s how they came to work together on the movie. They did an amazing job.

What’s your happiest memory from working on the movie?

ROGER ALLERS: There were many exciting experiences during making of the movie, like the first time we got to hear Hans Zimmer’s treatment of the opening song or the many times we spent working with the voice actors involved in the movie.

Which of the voice actors stands out in your mind?

ROGER ALLERS: We’d often travelled to New York to record with Nathan Lane and Ernie Sabella, who played Timon and Pumbaa. Those trips were always entertaining. Their charisma and wit would have us rolling around in the recording booth. We would be laugh so hard, we’d cry. They were hilarious and a joy to work with.