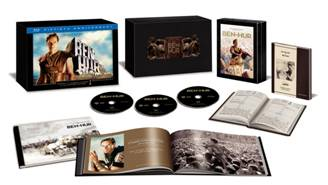 An inspiration to generations of filmmakers with its legendary scale and scope, “50 years later filmmakers and film experts are still in awe of the film,” says Ben-Hur documentarian Gary Leva. People like Ridley Scott, Ernest Dickerson, and others told Leva how Wyler’s film inspired them to emulate the filmmaker years later. Even with today’s technology, they still aren’t sure how some of the scenes were able to be put on film. Scott, who directed Gladiator, said his arena was one-sixth the size of the one where Ben-Hur had his famous chariot race. The gigantic oval, with incredible statues and architecture, took more than a year to build.

For this release, Ben-Hur has undergone a $1 million restoration — frame by frame from an 8k scan of the original 65 mm camera negative, making this the highest resolution restoration ever completed by Warner Bros. studio.

“We have been working on this extensive restoration for several years, hoping we could be ready with a 2009 release for the actual 50th. The meticulous process took longer than expected, but our primary goal was to deliver the finest quality presentation possible, and we have succeeded in doing just that,” said Jeff Baker, WHV’s Executive Vice President and General Manager, Theatrical Catalog.

Ben-Hur has been on moratorium for the past year. Now limited and numbered, each set contains more than four hours of extras including an all-new hi-def feature length documentary hosted by son Fraser Heston; a reproduction of Heston’s diary during filming; and an exclusive hardbound photo book.

“The restoration is almost trumped by some newly-uncovered Heston family home movies, shot in Italy during production, that reveal unique behind-the-scenes activity. Believed to be the only footage of its kind in existence, this marks something truly historic and unprecedented. And we are thrilled to be able to incorporate it into the documentary made by Laurent Bouzereau and Charlton Heston’s son, Fraser. The documentary will be obtainable only with this release.”

Baker believes fans also will be enthralled with Heston’s diary, which “reflects his thoughts and feelings on many of the days before, during, and immediately after the film’s physical production.

“The diary is a replica of the original,” Baker said. “We did not transpose Chuck’s words onto a clean white piece of paper. The natural fading of the pages, and any mistakes, are all seen as they are in the original diary. The concept is to preserve the authenticity. It’s a remarkable, collectible keepsake. No other disc release in history has included a personal diary of an actor, let alone an Oscar®-winning legend, sharing this type of personal information.”

Baker said that while under his watch Warner has produced several other Ultimate Collector’s Editions of classic movies. “This physical package in terms of aesthetics, historical content, and originality is the new gold standard for not only Warner, but for all studios. No one can forget seeing Ben-Hur in a theater for the first time. And now, a half-century later, it looks the best it ever has on Blu-ray in this pristine high-definition film restoration, perfect for holiday gift giving.”

After attending an early screening, Fraser Heston noted in a letter to Baker, “This is unquestionably the most remarkable restoration I have ever seen. It was an extraordinary, life changing experience, like sitting next to Wyler in his answer print screening, only better.

The picture was clear and sharp, not crisp or brittle like some HD versions. It looks like film not pixels. The colors were rich and vibrant but not overly so, muted where they should be muted, and bright where they should be bright. Blacks were astonishingly, well … black!  And the sound track was a rich experience in itself – lovely clear dialogue, rich mellow score and clean effects. I look forward to showing it to my family and friends as soon as I can.”

Details of the new bonus content for this release are:

With 100,000 costumes, 15,000 extras, 300 sets and a $15 million budget that, at the time, was the most expensive in MGM’s history, Ben-Hur is widely considered to be one of the most accomplished Biblical-era epics ever made. Based on Lew Wallace’s best-selling novel and adapted by Karl Tunber, Ben-Hur stars Charlton Heston, Jack Hawkins, Haya Harareet, Stephen Boyd, Hugh Griffith, Martha Scott, Cathy O’Donnell and Sam Jaffe.  The film ranks #13 in all-time box office when adjusted for inflation (source: Box Office Mojo).

Heston brings a solid physical and moral presence to the title role of Judah Ben-Hur, and his charismatic performance earned him one of the film’s 11 Academy Awards® (a feat equaled only by Titanic and The Lord of the Rings: The Return of the King).  In addition to the Best Actor award, Ben-Hur also captured Oscars for Best Motion Picture, Best Director, and Best Supporting Actor (Griffith).

The movie was filmed in a process known as MGM Camera 65, one of the widest prints ever made, with a width almost three times its height.  This allowed for spectacular panoramic shots and bold action sequences.  Even by today’s standards, Ben-Hur’s now legendary chariot race still astonishes.  The lack of computer-generated effects, the visually stunning MGM Camera 65 process, and excellent cinematography all make the scene one of the most memorable in modern cinema.

Experience the visual splendor, thundering action and towering drama of this record-setting Academy Award-winning film. Charlton Heston, in his Best Actor Oscar-winning role, is Judah Ben-Hur, a Jewish nobleman in Palestine whose heroic odyssey includes enslavement by the Romans, vengeance against his tormentors during a furious arena chariot race and fateful encounters with Jesus Christ. Best Director Oscar-winner William Wyler masterfully grips the reins of an enduring and spellbinding spectacular.

Disc One & Two: The Movie

The DVD UCE will have the feature film restored and remastered for standard definition plus the same Special Features spread over five discs.

The 2-Disc 50th Anniversary Edition DVD will have the feature film restored and remastered for standard definition with commentary plus a special edition poster mail-in offer and a commemorative o-sleeve.

*All enhanced content listed above is subject to change.

[1] Academy Award(s)®, Oscar(s)® , Academy- Award-winning® and Oscar-winning® are the registered trademarks and service marks of the Academy of Motion Picture Arts and Sciences.