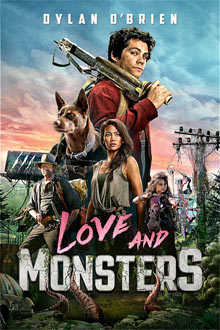 In a monster-infested world, Joel learns his girlfriend is just 80 miles away. To make the dangerous journey, Joel discovers his inner hero to be with the girl of his dreams. (from IMDb)

It’s going to take some time to adjust to seeing movies originally planned for theatrical release debuting on the small(er) screen at home instead. One recent release that received little buzz or fanfare is the Dylan O’Brien-led Love and Monsters. This post-apocalyptic action/adventure/comedy is eerily fitting for our current global pandemic, but it’s also a great bit of escapism entertainment for those looking to find something enjoyable to mentally checkout to. With a title like Love and Monsters, you can expect a movie that doesn’t take itself too seriously, but that also doesn’t mean it’s devoid of heart. (In fact, its original title during production was the also quirky, but less memorable Monster Problems.) 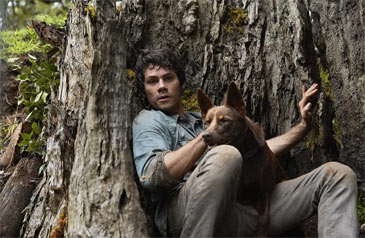 Dylan O’Brien, who may be most notable for the Maze Runner movie series and TV’s Teen Wolf, is great as Joel, a young guy who is a bit of an underdog due to his cowardice and being kind of a loner. The movie opens seven years after an asteroid hurtling toward Earth was destroyed, raining down fallout that turned all cold-blooded creatures into mutated, human-eating monsters. Most survivors reside in colonies that are secluded or underground, but their struggle to survive is a daily battle. Joel is one of the least essential in his colony, and also the only single person there. He spends most of his time sketching monsters they encounter in a guide book (which isn’t the only similarity here to How To Train Your Dragon, by the way), cooking minestrone for the colony, and dreaming of reuniting with his girlfriend from years ago, Aimee. 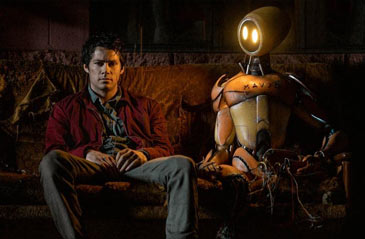 Tired of being alone and feeling helpless, one day Joel decides to risk everything and set out on an 80-mile trek alone in an effort to find the girl of his dreams. Along the way, he briefly teams up with a man named Clyde (played by Michael Rooker) and an 8-year-old girl (Ariana Greenblatt) who help him learn how to defend himself. He also acquires a canine companion named Boy who keeps him company on his journey. The lighthearted tone of the film makes this movie especially work, as it’s told almost in a tongue-in-cheek way exclusively through Joel’s eyes. O’Brien is relatable and charming in the part, and I was surprised at how likable he ended up being. (It always amazes me when filmmakers seem to forget how important it is for the central character of a film to be likable — the 2005 Steven Spielberg remake of War of the Worlds immediately comes to mind.) The special effects for the monsters aren’t quite as successful, but they work more often than not. In one of the first horrific encounters Joel has with a monster that we see, it seems to be a mix of physical effects (puppetry) and digital effects, and it works really nice — especially for conveying his crippling fear. Some of the monsters have an element of silliness to them, but for the most part, they are rather creepy or disturbing. Most of them appear to be of an insect origin, but occasionally they also take the shape of a mutated frog (one of the aforementioned “sillier” looking ones). If you’re squeamish about worm-like creatures and other creepy crawlies, this is a movie you might want to pass on.

The vibe of Love and Monsters is something akin to a Men In Black or the 1999 version of The Mummy — that blend of comedy and horror that aims to offer more thrills than truly frightening moments. Joel’s personal journey – the romantic side that drives him – is sweet and endearing, and you can’t help to root for the guy on his quest. The side characters in the film are all pretty good, too, especially Rooker’s Clyde and Jessica Henwick’s Aimee. One of the best side characters, however, is the robot Mavis (voiced by Melanie Zanetti), who adds some great comic relief during a sequence where Joel gets some quality one-on-one time with a working Mavis robot. The only characters that do fall a bit flat, unfortunately, are the film’s human antagonists. They feel a little tacked-on to the story, if not entirely forced, and the battle at the end gets too over-the-top for its own good. It still has its moments, but it gets silly at times – and this time not in a good way.

The film’s content is firmly a PG-13 rated outing. Although there are no uses of the “F” word, there is frequent uses of the “S” word, as well as other cuss words and plenty of uses of God’s name as exclamations. There’s also a little sexual content at the beginning when Joel is seen lying in bed in the colony and his voiceover is lamenting about being the only single one there (so we wear some sounds from other couples being together nearby). There is some monster violence, most notably when Joel watches a bug eat a man, and we see it in shadows on the other side of a curtain (So we see the shape of his legs falling off as he’s bitten into pieces). Joel sustains some bloody cuts throughout the film, and there’s a pretty gross scene where we see him pulling leeches off of himself (and then having a poisonous reaction to it, with veins popping in his skin a little bit). We also see some creature gore a couple times when bombs blow them up (with chunks of bug flesh raining down), and when we see Clyde peering over a cliff at a dead giant spider carcass below.

Love and Monsters is the right mix of serious and funny, without ever being too goofy or campy. It’s creepy, gross, funny, and maybe even inspiring (with the theme of overcoming our fears), and one that will make for a good October / spooky movie season each year. The content, unfortunately, is on the edgier side (and it’s definitely not as “family friendly” as some other reviewers have dubbed it), with excessive cussing and some violent content.

Sex/Nudity: During Joel’s introduction at the beginning of the movie, he talks about being the only single guy in his colony. We see in passing a girl lying on top of a guy as the camera moves past and he talks about couples getting together. He looks up and sees the ceiling light fixture shaking and we hear some muffled sexual sounds. In another moment, he walks through the colony and stops when he sees two friends either naked or in the middle of sex, but we just see the lower half of their bare legs entwined (and he reacts awkwardly to whatever he sees that we do not); We briefly see a man and woman couple in the bathroom together with towels wrapped around them; A girl closes her bedroom door with Joel sitting outside it (insinuating she and her male partner want privacy); In a flashback, Joel and Aimee passionately kiss. They climb in the backseat of their car to make out but are interrupted; Aimee and Joel kiss passionately.

Blood/Gore: Joel steps in a puddle of blood. We then see the shadow through a curtain of a monster eating a man and his legs falling down. After the bug is killed, we see the decapitated bug head on the ground; Joel falls in a hole with bones littering the floor; Clyde clices a worm with a sword and Minnow throws a grenade in the hole. Pieces of the bugs fly out and land on Joel; We see the gross and dead carcass of a giant spider lying in a valley; Joel has a couple bloody cuts on his face; In a flashback, Joel’s dad has some blood on his nose; Joel throws a grenade into a giant slug’s mouth, blowing it up. We then see bloody chunks everywhere; Joel pulls leeches off his arms and chest. We see bloody lesions on his skin. As his body reacts to the poison from the leeches, his skin turns green and pale with popping veins; We see some bloody bandages on Joel’s arm and some blood on his ear; Amy bloody lip and scratches on her arm and hands.

Violence: In the film’s intro, we see imagery of burned and broken buildings and rockets and explosions. We see bugs growing big in drawing form and eating people and causing destruction; A bug attacks their colony and Joel runs out to see if his friends need help. He then sees the shadow of a bug as it is eating a man. It then pushes through the curtain and faces Joel, who freezes in terror and closes his eyes. His other friends then show up and kill the bug. He then opens his eyes and sees the gory remains of the bug at his feet; In a flashback, we see rockets and gigantic bugs and explosions in the distance terrorizing a city; A frog-like monster grabs Joel’s foot with its tongue and he slides away towards it until a dog bites the tongue and it lets him go; We see a little bug eat another little bug; Joel falls in a hole with bones littering the floor; A worm creature jumps out of a hole in the wall and jumps at Joel. More jump out as he panics. He’s then pulled out with the help of Clyde; Clyde clices a worm with a sword and Minnow throws a grenade in the hole. Pieces of the bugs fly out and land on Joel; We see the gross and dead carcass of a giant spider lying in a valley; In a flashback, we see a car with people in it get crushed under the foot of a large monster; Joel is thrown by a tall bug. It then wraps around a large statue Boy is hiding underneath and throws it. Joel then realizes he must try to save the dog and shoots the bug with arrows; Joel runs from a giant underground slug and then throws a grenade into its mouth, blowing it up. We then see bloody chunks everywhere; Joel pulls leeches off his arms and chest. We see bloody lesions on his skin. As his body reacts to the poison from the leeches, his skin turns green and pale with popping veins; A woman punches Joel and knocks him out; Dana shoots a rocket at a cliff wall, causing an explosion; A woman charges at a guy who is holding a shotgun and shoots at a piece of metal she’s using as a shield in her hands. She rams him through a tin wall; Joel stabs a giant crab with a spear. A man pushes a button on a device that then shocks it, and then it hits Joel. The man shocks it again; Two women have a violent fist fight and beat each other. A man punches a woman in the face; A rocket hits the giant crab and a man shocks it again; The giant crab swims out to a boat and eats a couple people on it and then sinks the boat.