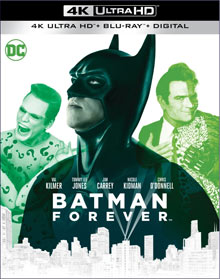 Batman must battle former district attorney Harvey Dent, who is now Two-Face and Edward Nygma, The Riddler with help from an amorous psychologist and a young circus acrobat who becomes his sidekick, Robin. (from IMDb) 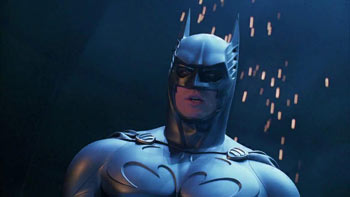 Batman 4K 2019 Release Intro
Before Twilight‘s Robert Pattinson (yup, that’s officially a thing now), before Batfleck, and even before Christopher Nolan’s stellar Christian Bale-led trilogy, there were four other Batman adventures that spawned from 1989 to 1997. To celebrate 85 years of the caped crusader, Warner Bros. is re-releasing all four films individually in a brand new 4K transfer with updated accompanying blu-ray discs. (The movies will also be releasing collectively in a set on September 17.)

I was just a kid when Michael Keaton’s Batman debuted. I still remember seeing it on the big screen… and being terrified. It wasn’t a kids movie by any stretch of the imagination, and that kind of set the darker tone for the films that would follow (even though the final in the series, Batman and Robin, was the most “kid-friendly” of the bunch, despite still being pretty creepy at times). Revisiting these films all these years later, it just shows me how far superhero movies have really come. After this year’s gigantic event film, Avengers: Endgame, or even Warner’s newest property, Shazam!, the quality is so much greater than what was produced in the late 80’s and 90’s (and this is coming from someone whose top 4 favorite movies of all time are out of the 80’s). For these Batman reviews, I’m going to give an overview of them as a movie and also in this new transfer quality, while giving my usual content breakdown at the end. The 4K discs didn’t have any special features on them beyond commentaries, but the regular Blu-Ray discs included in these sets do. Since the main feature of these releases are their new 4K transfers, I’m going to just focus on that aspect (and not the blu-ray bonus features). 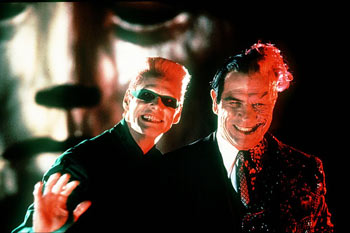 Just over a year before this very website began, we were given a new kind of Batman in Batman Forever. Keaton was out and Val Kilmer was in, with director Joel Schumacher (tragically) taking over direction duties from Tim Burton. His style was exceptionally different, and I remember liking this film a lot more when I first saw it as a teenager. Revisiting it now, as an adult, and after seeing far better Batman movies, I’m surprised at how poorly this movie plays. I remember really liking Val Kilmer as Batman in the 90s, but today, I see just how poorly he worked as the Caped Crusader (especially those abysmal one-liners). Kilmer made a better Batman than a Bruce Wayne, so there was definitely some potential for him here, but the movie itself was just a hot mess. What a cast, though! I have long been a fan of both Jim Carrey and Tommy Lee Jones, and it’s still a trip to see them share the screen together (although it’s sad I’ve since read that Tommy Lee hated working with Jim!). Both actors go way, way overboard with their respective roles, which in and of itself is slightly entertaining, but one can’t help but wonder what this same cast could have done with, say, a Christopher Nolan script and direction. (Nolan isn’t a perfect filmmaker, I know, but when you compare his work to these movies, there’s just no contest). I could fill pages on all that’s wrong with Joel Schumacher’s Batman films, but just to name a few big ones–these films just continued to careen further and further off the rails into a neon-drenched cartoon world that was more embarassing than fun. And while Kim Bassinger’s Vicki Vale was a good, strong female lead, the beautiful Nicole Kidman was reduced to this dopey damsel who literally throws herself at Batman while she’s in skimpy lingerie. In the context of a more kid-friendly Batman film, it just comes off as something a horny young teen might imagine for these characters–not something you’d seriously expect in a movie like this. There are just so many things about the story, acting, set design, etc, that come of as sophomoric and immature. So much talent is wasted here.

But despite the tonal metamorphosis from the first two films to the next two, these movies still aren’t particularly kid-friendly. The content for Batman Forever is certainly tamer than the Burton films, but here we’re introduced to Chris O’Donnell as Robin and we are right there beside him as he watches his parents and sibling fall to their death from a highwire at the circus. At the same time, Two-Face (Jones) and Riddler (Carrey) are as sadistic as any Batman villain, and their over-the-top lunacy may certainly be disturbing (if not altogether inappropriate) for younger viewers. Still, Forever doesn’t have the kind of eye-shielding graphic visuals that Burton’s outings did, and that alone makes them a bit more consumable for wider audiences. (Miraculously enough, no one is charred to a creepy crisp in the Schumacher films.) 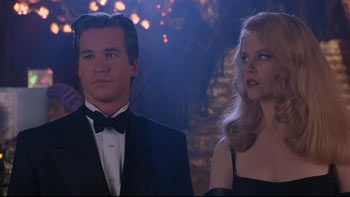 As you can imagine, the 4K transfer looks even better for this mid-90’s outing. Schumacher’s overtly colorful palette comes across strong in this crisp and vibrant presentation. Warner Bros. went back to the original negatives for these transfers and scanned them in at the highest resolution possible. Not every scene looks great, but I promise you we’ve never seen Batman Forever this clear or colorful before. If you’re a fan of the film, it’s worth getting this new release, even if it’s a double-dip for you.

Of these four Batman films, Batman Forever just might have my favorite cast. It’s not a good movie, but seeing Carrey and Jones ham it up together is a bit of a guilty pleasure. Still, it’s cringe-worthy level bad in more ways than one, and that alone makes it impossible to recommend…

Sex/Nudity: Chase summons Batman and approaches him in a sexy outfit that accentuates her cleavage. She gropes his chest and says she likes black rubber. She removes her outer shirt/kimono from over her shoulders to reveal a small lingerie-type outfit. He rejects her advances; Bruce says to Chase “I really gotta get you out of those clothes” and she says “excuse me?” And he adds “and into a black dress;” Two-Face’s girlfriends wear corsets style lingerie; We see Chase only wrapped in a bed sheet. She covers herself with it and walks to the window. She kisses Batman passionately; While talking about learning people’s secrets from reading their minds, Riddler says he’ll learn people’s “sexual fantasies” and later says that Robin hopes to someday be “bare-naked with a girl.”

Blood/Gore: Half of Two-Face’s face is a scarred and disfigured purple face; We see some slightly bloody scratches on Bruce’s bare shoulder; We see Bruce with a bruised eye and a slightly bloody bandage over his forehead; Riddler’s head looks mishapen and somewhat disfigured after he soaks up lots of brain waves.

Violence: Two-Face threatens a guard as a hostage; A wrecking ball goes through a wall in a bank; Thugs shoot up an elevator that Batman is in. He exits, knocking them all down and then fights them–including shocking them; Batman and a guard are locked in a safe that is pulled out and flown away by a helicopter. Acid fills the vault as they struggle to get away from it while stuck inside; Two-Face shoots at Batman outside the front of the helicopter and ends up killing the pilot as collateral damage. The helicopter crashes into the face of the Statue of Liberty and blows up; Edward knocks a guy in the back of the head with a metal coffee pot. The man wakes up strapped in a chair and he uses a helmet and machine to drain his brain waves. He then pushes him toward a window and he crashes out of it. He’s hanging by a wire outside the window and Edward pulls the helmet off the man, causing him to fall into a waterfall below; We see video of Harvey being hit with acid in the face; Bruce hears Chase making fighting sounds on the other side of a door and he busts it down thinking she was in trouble (she’s, instead, working out); Harvey and his goons take over the circus. Bruce and Grayson knock out some of them; Two-Face shoots up at the trapeze artists hanging above him. Grayson’s family fall to their death. We see them lying on the ground dead; Bruce flashes back to his parents’ murder. We see them falling and a man with a gun; A car with thugs in it blows up from a bazooka. Cars with guns fire on the Batmobile. Several cars crash into each other and create a large fireball; Harvey keeps holding a gun on Riddler. He fires the gun in the air; Riddler and Harvey and his goons take over a jewelry store, breaking glass. We then see them rob a casino. Harvey punches a guy. Riddler then tries and just hurts his hand; A gang menaces a woman by pushing her around. She runs away and they chase her. Grayson fights them off with kicking and punching. Their numbers increase and they chase him up a fire escape. Batman shows up to help; Grayson punches Batman repeatedly; Harvey crashes Edward’s party. Then Batman comes through the ceiling glass and starts beating thugs up. They try to bury him in fire and then gravel, but Robin pulls him out; Chase accidentally knocks over a vase of roses and Bruce has a flashback of his parents’ murder; Bruce has memories of falling in a well; Some bad guys knock out Alfred and he falls over; Two-Face’s goons chase Chase and Bruce. Meanwhile, Riddler throws grenades inside the Batcave, blowing it up. We see the Batmobile blow up, too; Harvey shoots Bruce and he hits his forehead. Bruce then slides down the stairs; Harvey and Riddler set off bombs to try to blow up Robin’s boat. They then shoot at Batman’s Batwing; Robin punches Harvey multiple times and he hangs off a cliff; We see Chase tied up in a large glass tube. Robin is tied up in another; Batman busts Riddler’s machine with a batarang and it warps Ed’s head with the waves. He then jumps to save Robin; Harvey accidentally falls to his death in a pit below. We see his hand slowly slip into the water.