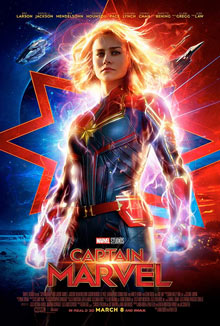 Carol Danvers becomes one of the universe’s most powerful heroes when Earth is caught in the middle of a galactic war between two alien races. (from IMDb)

Leaving fans with quite a cliffhanger after last year’s Avengers: Infinity War, “Phase 3” of the “Marvel Cinematic Universe” (MCU) is now drawing to a close. But before we get a finale in Avengers: Endgame next month, we’re introduced to a new major player in the MCU in Captain Marvel. For the latest new superhero introduction, Academy Award winning actress Brie Larson suits up as Carol Danvers, bringing the hero to life on the big screen for the first time.

Set in 1995, Captain Marvel takes us back to a time when things like Blockbuster Video, Radio Shack, and Nine Inch Nails were commonplace–just a few of the many references to the decade made in the film. This gives the latest entry in the MCU a distinctly different feel than what we’re used to seeing, with the movie even capturing the feel of films that released in the mid-1990’s. The interwoven nature of these films allows for familiar faces to reprise roles, like Agent Coulson from “Phase 1” and frequent player, and head of S.H.I.E.L.D., Nick Fury. But also lesser-known faces, like Djimon Hounsou and Lee Pace reprising their roles as Skree from 2014’s Guardians of the Galaxy, also make a return. It’s exciting to see how things tie together between films, smaller roles fleshed out a little more, and new pieces of the larger puzzle fall into place. While the mid-credits end scene directly connects Captain Marvel to Avengers: Endgame, this film probably could be viewed somewhere between Captain America: The First Avenger and Iron Man in the overall timeline.

Instead of the standard origin story, Captain Marvel takes a bit of a Man of Steel approach, showing us flashbacks periodically throughout the course of the film, but also holding back the big reveal as to how she got her powers till later in the film. It’s an interesting storytelling technique, which surprisingly doesn’t always work. This is mostly because of the way the first quarter of the film is structured. You’re likely to keep wondering what in the world is going on even when the film expects you to be up to speed. Part of it is because of the confusing way Carol receives her flashbacks, and other ways that the aliens–or higher intelligences?–are depicted. There’s also a bit of a twist that happens during the story that is surprising, but it also stirs up some political controversy that is timely in our country today, that is an unwelcomed change for a Marvel movie. (I feel like there’s a time and a place for these kinds of discussions and topics, and it’s nice to get a break from political disputes in entertainment, like comic book films for example.)

With that all said, Captain Marvel is a bit of a mixed bag. Again, even before the Skree and Krull aliens make it to Earth (or “C-53” as they refer to it), the movie has a distinct 90’s sci-fi feel. The practically-designed alien make-up also recalls a Star Trek vibe, which was something especially popular during the decade. There’s even a brief planetary sequence that feels like a modern version of a classic Star Trek TV series scene. But even a lot of the alien tech and graphical design (like Carol’s wrist computer) feel distinctly 90’s. It’s a unique devotion to the time period that feels altogether fun, intriguing, and even somewhat outdated. Once the film makes it to Earth, and things really get enjoyable, it especially feels like something lifted from 1997’s Men In Black or the TV show X-Files–and that’s not at all a bad thing. Samuel L. Jackson is a joy to have with a more fleshed-out role as Agent Fury this time around. What’s jaw-dropping is just how perfectly they managed to de-age the actor to look so much younger for 1995. It’s unfathomable to believe he’s actually 70 years old now! He’s a delight in this role, and it’s great to see him before his older, more serious persona that we’re so familiar with now. He’s also the source of a lot of the humor in the film, alongside Carol’s pet cat Goose, and even Ben Mendelsohn playing a dual role as a Skrull named Talos and Fury’s boss Keller (which is slightly confusing the way it’s done as they’re literally two different characters). The humor is a bit out of place at times, despite being still funny, but it tends to rob the film of the necessary tension or drama to best serve the story. It doesn’t ruin the film by any means, but it definitely weakens it.

One of its biggest problems, however, may be in the title hero herself–and by no fault of actor Brie Larson, mind you. It’s once Carol realizes her full potential where things get a bit dodgy. Without a real clear explanation (there is some), she basically becomes the most powerful superhero we’ve ever seen, even being able to remain in space without a mask and blast through an entire space cruiser with decimating results. It’s not entirely over-the-top, but it starts to really feel like a bit much… and you can’t help but wonder why Fury hadn’t summoned her in 2012 for the battle of New York, or even when Ultron got out of hand. The movie does play up the fact that Carol is a woman-as-a-hero a little bit, but not nearly as much as Wonder Woman did a few years ago (although, it seemed to make more sense for the WWII time period she was living in). The 90’s songs-driven soundtrack was a fun treat for this movie, although setting her big fight sequence to No Doubt’s “I’m Just a Girl” felt heavyhanded and out of place. It actually seemed a disservice to the character (and the film), and was merely distracting during the scene. 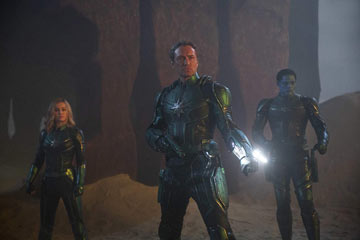 The content is in line with the usual things you can expect from a Marvel movie. There are no uses of the “F” word, however Fury uses a play on it by exclaiming “mother Flerkin'” as a joke in a scene. Otherwise, there are 2 uses of the “S” word, a pair of “Oh my G-d,” and a few uses of “-ss,” “h*ll,” and “d*mn.” For the most part, cussing was infrequent in this one. There isn’t any sexual content, but when a male pilot of the Air Force is belittling Carol, he says, “There’s a reason why it’s called a cockpit,” which is an insult that will go over younger viewers’ heads but is certainly an off-color suggestion. Violence is the main caveat here. The most gruesome scene is probably a brief glimpse at an alien autopsy. We see the skin pulled back around the abdomen of the alien, with purple blood everywhere and a diener in a morgue holding one of the organs in his hands. Several times, characters are shown with bloody scrapes on their faces–sometimes red, other times blue or purple, but none of it is exceptionally graphic.

Captain Marvel is a decent entry into the MCU canon, but it doesn’t come without its fair share of problems. However, warts and all, it’s still an enjoyable movie going experience (especially in IMAX’s gigantic presentation), even if this film may be one of the few examples where DC’s approach to a similar kind of hero (Wonder Woman) proved to have a better result than Marvel. Still, I look forward to seeing Captain Marvel again to see how repeat viewings may affect my feelings of it, and I look forward to seeing how the character comes into play in April’s Endgame!

Sex/Nudity: We see a flasback where a male Air Force pilot insults Carol by saying “there’s a reason why it’s called a cockpit!”; Carol steals the clothes off a mannequin and we see the topless, shapely mannequin briefly; Two characters in a morgue look at an alien body on the examining table and comment how human it looks. They then both decide to peek under the sheet at its genitals and make an impressed reaction at what we’re not seeing.

Alcohol/Drugs: We see some partying in a bar in a flashback; Carol goes into a bar in an effort to research her past.

Blood/Gore: Carol has a flashback where she’s lying on the ground with blue blood coming from her nose; We see a dead Skrull in a car with lots of purple blood all over its face; Fury has a good deal of blood over his eye after a car accident. We then see it taped with a butterfly bandage for the rest of the film; After a plane crash, a character has some blue blood on their head. They’re then abruptly shot and we briefly see a small spray of blue blood from the impact; As the Skrulls change to humans and humans change back to Skrulls, the skin appears to split and rip in a way that’s kind of gross; We see a brief glimpse at an alien autopsy. We see the skin pulled back around the abdomen of the alien, with purple blood everywhere and a diener in a morgue holding one of the organs in his hands; In a flashback, we see a young Carol falling and having a somewhat bloodied arm; SPOILER: Goose slashes a man in the face, leaving 3 bloody gash marks over their eye. We see the cuts several times in scenes afterwards.

Violence: Lots of comic book style violence; We see flashbacks of Carol falling over during some kind of battle; We see Carol and Yon-Rogg fighting while training. She blasts him with a power beam from her hand and it sends him flying; There’s a prolonged action sequence where Carol, with her hands in capped restraints, fights off a bunch of alien soldiers, hitting them and throwing them around; We see a series of flashbacks of a young Carol falling off a bike or falling down during a softball game, etc, and then getting back up; There’s a prolonged action sequence where Captain Marvel fights and beats up a bunch of aliens; An animal opens its mouth and large tentacles come out, grabbing enemies and pulling them inside its mouth (it’s meant to be shocking but funny); Captain Marvel zips through space, smashing through large ships and presumably killing anything inside; Some aliens are hit with energy blasts that wound or kill them; and other alien related action sequences.