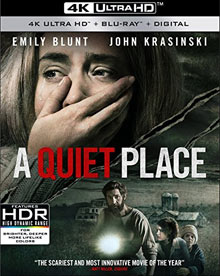 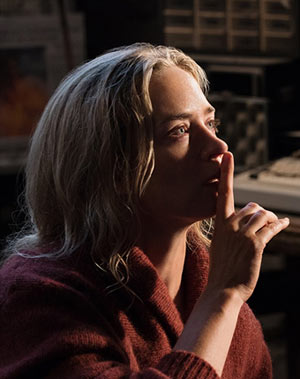 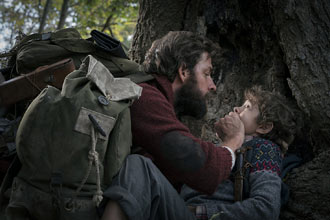 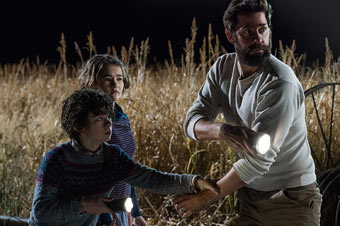 Along with the feature film in 4K UHD, the 2D Blu-Ray disc and digital copy of the A Quiet Place are the following Extras:

A Quiet Place in 4K UHD – The 4K version of A Quiet Place, with HDR (High Dynamic Range), is beautiful. It’s a slightly grainer picture than some other 4K discs I’ve seen–and I could have sworn I occasionally saw dust on the film (which shows a flash of a white speck during a given shot), but it’s minor. 4K is still crisper with more brilliant colors than Blu-Ray, so while this is not the best 4K transfer I’ve seen, it’s still very good.

Creating the Quiet – Behind the Scenes of A Quiet Place (14:45) – This great little featurette opens with explaining the origin of the film’s story. Here we learn that two writers had the idea, pitched it to John Krasinski, and he agreed to do it. He actually decided to do his own pass at the script himself, minimizing the horror element of it a little, and then wanted to take on the director’s role, as well as star in it. Krasinski then takes over much of the discussion about the film and its story, revealing how his wife, Emily Blunt, decided to take the role (after first being rather reluctant). We see lots of great behind the scenes stuff here, and hear from the cast as they talk about the project.

The Sound of Darkness – Editing Sound for A Quiet Place (11:43) talks about the power of sound and how important of a role it plays in this story and film. They also talk about the way they used it here, and even how they had scaled it back and utilized less music than originally intended, trying to minimize noises and sound. They actually play some of the original sounds from December 2017’s cut of the movie and compare it to the final cut. (1 “Oh my G-d”)

A Reason for Silence – The Visual Effects of A Quiet Place (7:33) is about designing the creatures in the film and how ILM created the effects we see in the movie. Michael Bay’s team from Transformers had helped on the sound and design of the film, and Krasinski had nothing but great things to say about all of it. We see some early creature design concepts here, hear about the origin of the monsters, the different revisions to the design, how sound came into play, and how they’d used motion capture technology to bring the creatures to life. There’s even a great example shown of how they had an actor move like the creature and then they inserted the creature realistically via digital effects afterwards.

On iTunes: Image Galleries – I’m not sure if it’s exclusive to the iTunes digital copy, but if you view the iTunes version, you get additional image galleries, separated into four categories: Atmosphere, Behind The Scenes, Creature Design and Production Design. The photos are really neat and a great addition to the extras for the film.

Blood/Gore: Some Semi-SPOILERS ahead… In a dimly lit scene, we see a racoon explode in a spray of blood when a monster quickly smashes and grabs it; Evelyn accidentally steps on a nail on a stair step and we see blood as she pulls her foot off of it (in close-up). We see some blood on the stair afterwards and we see her leave some bloody footprints; Lee and his son see a dead woman lying in the woods. There’s a little bit of blood on her face and her eyes are open. As the camera pans down her body, we see the beginning of a very bloody wound, but the camera cuts back to their horrified reactions as they see the rest; A man is slashed by the monster and for a split second we see a bloody cut across his abdomen as he falls (but we see this from a distance); We see blood in a tub Evelyn sits in as she starts to give birth; Lee finds a tub empty with blood all over the inside of it; A bloody hand slaps the inside of a shower door. We then see inside where there’s more blood after Evelyn has given birth; A person has blood on their clothes on their side after being hit by the monster; A monster’s head explodes in a splatter of blood after being shot.