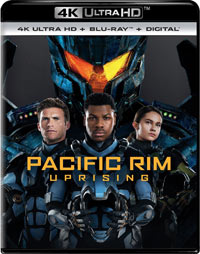 Jake Pentecost, son of Stacker Pentecost, reunites with Mako Mori to lead a new generation of Jaeger pilots, including rival Lambert and 15-year-old hacker Amara, against a new Kaiju threat. (from IMDB) 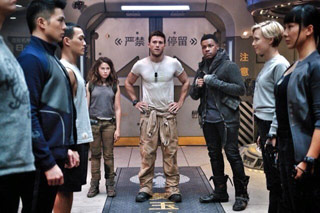 Sometimes the movies that just fall shy of greatness are the ones perfectly primed for a sequel or an extended franchise. 2013’s Pacific Rim was a fun, unexpected monster movie that pit gigantic robots against huge kaiju monsters in a fight against human extinction. Think Transformers vs Godzilla and you pretty much had Pacific Rim. Guillermo del Toro, who recently won several Oscars for his more mature effort, The Shape of Water, helmed Pacific Rim, fusing it with great action sequences and some bizarre, quirky characteristics. Its humor was a bit off, throwing comedic characters into the mix that felt like they wandered into the wrong movie, but somehow, it worked — at least well enough to develop a small cult following and earn plans for a sequel. However, the sequel kept circling the drain, with news constantly coming and going about it going to happen, then not happen, then happen again. But now, five years later, we have Pacific Rim: Uprising, a follow-up that takes place 10 years after the first one.

Pacific Rim: Uprising has just as many things going against it as it does for it. It’s been five years since the first film released, its main character isn’t returning, its director isn’t returning, and it’s not even being made by the same movie studio. However, it is coming during a time when people still seem to like the Transformers films, it has a young cast of up-and-comers, and it’s fronted by Star Wars alum John Boyega — not to mention, a small handful of cast from the first film are back. However, the end result is undoubtedly a mixed bag. The focus on a new cast is typical of these kinds of passing-the-torch sequels, but they even do some really surprising things, like vilifying unexpected characters, and dismissing others entirely.

I’ve always felt like the first Pacific Rim felt uneven tonally, but Uprising is even worse in some ways. The film opens very differently than the first film, but attempts to tell us what has transpired in the past ten years in the same way the first film set up the plot. However, suddenly, Idris Elba’s Pentecost character from the first movie has a son who’s older now and they go to great lengths to make it clear that he’s not like his father in any way. It gets silly rather quickly, but the story then tries to juggle the lighthearted and the more serious for the rest of the movie — and it makes the film feel flimsy in its execution. Worse yet, our new Pentecost (played by Boyega) runs into a young, teenage girl who somehow built her own mini-Jaeger and she inevitably becomes the newest recruit in the war against the Kaiju. However, this dynamic also immediately gives the movie a Transformers: The Last Knight vibe, and in no way is that a good thing. The first Pacific Rim, although it wasn’t super serious, wasn’t unashamedly targeted to a younger audience, but Uprising makes no qualms about trying to cater to them, and the end result is unfortunate. This attempt to widen the audience may have worked if the aforementioned teenage girl was actually likeable, but sadly, that just isn’t the case here.

The content for the movie isn’t great, but it’s probably still lighter than a Transformers film. Along with quite a few uses of “h*ll” and then a handful of other cuss words, like 2 “S,” an “S.O.B” and a use of “g*dd*mn,” there’s also a moment where one of the Jaegers flips off two middle fingers. Finally, there are a couple slightly crude jokes made, and some forced attempts at a love triangle, but nothing too explicit. The violence is what you’d expect from this franchise, but it seldom gets gory or graphic. The most graphic moments involve the Kaiju monsters — whether it’s glowing blue blood or pieces of their flesh getting torn or blown off. Overally, it’s lighter fare than the first film.

Sometimes sequels add to a series, but this time around, Uprising may be one of the many sequels that subtracts by addition. Some of the action scenes are decent, but there is surprisingly very few of them. For a Jaeger vs Kaiju franchise, there’s very little of that kind of action. Instead, the series takes a surprising side trip that falls somewhere between clever and stupid, using plot elements from the first film as jump-off points to evolve the interactions between the Kaiju and the humans, while trying to not just remake the first film again. One such attempt is having Jaeger versus Jaeger in one sequence, but we’ve seen that before in all five Transformers films; that’s nothing new. Still, it’s pretty out-there, giving viewers a pretty hard pill to swallow — especially when it makes one of the sort-of heroes of the first film a crazy villain that’s something right off the pages of a comic book or a scene in a Saturday morning cartoon. (It’s almost to the point where you probably wouldn’t be surprised if Darkwing Duck suddenly showed up.) 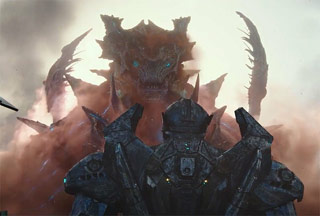 With all that said, Pacific Rim: Uprising is entertaining, but it has its dull moments too (especially a good portion of the first third of the film), with new characters that are hit and very miss (sorry, but little Cailee Spaeny’s junkyard genius character, Amara, nearly ruins the movie for me. The movie is always more enjoyable when she wasn’t on screen. The opposite can be said for the very few scenes that Rinko Kikuchi appears in). Uprising certainly isn’t the worst sequel you’ll see this year, but it’s not good enough to justify its own existence, and if you absolutely loved the first one, chances are slim you’ll love this one, too.

Along with the feature film in 4K UHD, the 2D Blu-Ray disc and digital copy of the film are the following Extras, including a feature commentary with director Steven DeKnight (1:50:41):

Pacific Rim: Uprising in 4K UHD – 4K seems like such a finnicky format, especially in comparison to Blu-Ray/HD. The settings on your TV may look perfect for one movie, but all wrong for another. With that said, Pacific Rim: Uprising is brimming with color and vibrancy. It’s crisp, clear, and really brilliant with eye candy. If you enjoy 4K, this is a nice choice.

Deleted Scenes with Optional Commentary – There are 8 deleted scenes with no “Play All” option. “Alt Party James Gunn” (0:23) is just a cameo shot of the Guardians of the Galaxy director appearing as a DJ at a party. “Amara Arrives at Shatterdome Part 1” (0:42) shows her arriving on the base and expressing that she wants to meet Liwen, but is just a cadet. Next is a “Part 2” of that sequence (1:50) with Amara pressing Jake about his past (1 “d*mn” and 1 “h*ll” in subtitles). “Amara Meets Cadets” (1:13) just shows a little more of the cadets interacting. It’s weird because the characters just feel like live action cartoon characters more than real people. “Jake and Nate Discuss Jake’s Return” (0:41) is a short moment where Nate expresses not wanting him back (1 “d*mn). “Amara Meets Liwen” (1:03) is a sad little scene where Amara meets her hero, but she’s really nasty to Amara. “Newt and Alice” (1:00) is a little scene where Newt talks to her about work, unseen, in another room. “Kaiju Brain from Fury” (0:38) is a short scene where Gottlieb is introduced to the brain recovered from a Jaeger hybrid.

Bridge to Uprising (4:40) is about Uprising continuing the story 10 years after the first film, changing things, and keeping some popular aspects of it as well.

The Underworld of Uprising (3:48) covers the film’s opening sequence when we first meet Jake and Amara. It talks about their underground world and the different lifestyle there. There’s some great B-roll footage here, too. (1 “a” word)

Becoming Cadets (5:59) – This segment talks about the cadets–on and off the screen, and how close they were off screen as well. We learn, too, that the actors were allowed to develop their own back story for their characters. We also see how they trained at the gym to get in shape for these roles, too. (2 “a” word, 1 “Oh my G-d”)

Unexpected Villain (5:48) – Spoiler alert! This talks about the two scientist characters from the first film – Gottlieb and Newt – and where they’ve been for the past decade… and how they play a part in this sequel.

Next Level Jaegers (5:09) talks about how they advanced the Jaegers for this film, building on the robots from the first movie. They describe them as: if the originals were tanks, these are fighter jets. (1 “a” word)

I Am Scrapper (2:43) focuses on Amara’s homemade mini-Jaeger.

Going Mega (3:21) is about designing kaiju for this film… and literally merging them for the grand finale.

Secrets of Shao (3:15) covers the robot/kaiju hybrids featured in the film.

Mako Returns (2:08) is all about Mako making an appearance in this film, and passing the torch to Jake.

Sex/Nudity: We see a montage at the beginning of the film of Pentecost’s wild life, including him asleep on a jet ski in a pool with a woman in a small bikini (showing a decent amount of “side boob.”); Some jokes are made about Jake and Nate both liking Jules, with Jake often flirting with her; Suresh makes some comments about having to work as a plastic surgeon like his father if he doesn’t make it as a cadet. He gets teased a bit that he’ll have to “work with boobs.”

Alcohol/Drugs: We see Jake partying with a bunch of people, having drinks, at the beginning of the film; Jake has a beer while talking to Nate.

Blood/Gore: We see a burned arm sticking out of wreckage inside a Jaeger; A man is seen injured with blood on him and his side (but it isn’t too graphic); We see some people injured when the cadet base is attacked; A giant Kaiju spills blue blood everywhere during the climactic fight; We see some gooey Kaiju organisms in a few scenes

Violence: We see some flashback footage of jets and Jaegers fighting Kaiju; A small Jaeger is chased by a giant one, causing mayhem in the streets and some destruction; A Jaeger fights other Jaegers causing destruction and a helicopter to crash, killing people inside; In a flashback, we see a little girl witness her parents get killed by a Kaiju when a bridge is smashed that they’re standing on; Two groups of robots fight on the ground with lots of destruction; Some men fight inside of an elevator with a cane or are pistol-whipped; The climactic battle involves a couple Kaiju monsters and some mini Kaiju creatures that cause the monsters to unite into one gigantic one. The monster fights and destroys several Jaegers, destroying some and killing at least one of the pilots; and lots of other sci-fi action violence.