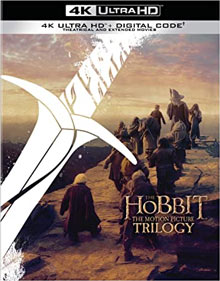 The Hobbit: The Motion Picture Trilogy 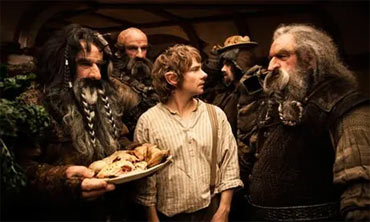 The adventure follows the journey of title character Bilbo Baggins, who is swept into an epic quest to reclaim the lost Dwarf Kingdom of Erebor from the fearsome dragon Smaug. Approached out of the blue by the wizard Gandalf the Grey, Bilbo finds himself joining a company of thirteen dwarves led by the legendary warrior, Thorin Oakenshield. Their journey will take them into the Wild; through treacherous lands. Bilbo Baggins not only discovers depths of guile and courage that surprise even him, he also gains possession of Gollum’s “precious” ring that holds unexpected and useful qualities… A simple, gold ring that is tied to the fate of all Middle-earth in ways Bilbo cannot begin to know. (from MovieWeb.com)

The 4K Ultra HD Blu-ray discs of The Hobbit Trilogy features Dolby Vision HDR that dramatically expands the color palette and contrast range and uses dynamic metadata to automatically optimize the picture for every screen, frame by frame. The 4K Ultra HD Blu-ray discs of Hobbit Trilogy also features a Dolby Atmos® soundtrack remixed specifically for the home theater environment to place and move audio anywhere in the room, including overhead. (from Warner Bros.)

With Peter Jackson’s The Lord of the Rings trilogy being given the 4K UHD treatment this year, it only makes sense that his follow-up prequel trilogy of The Hobbit also gets a visual upgrade. For The Lord of the Rings trilogy, Jackson had gone back to the film negatives to give it the clearest presentation possible. I had thought the Blu-Ray discs had looked quite beautiful when they released, but the 4K versions really went above and beyond expectations. The only downside to this new, crystal clear upgrading was that the clarity revealed the limitations of the computer graphics of the early 2000’s. Furthermore, it caused some of them to stand out from the background in ways that hadn’t previously been noticeable. The grainier (than 4K) look of the Blu-Ray discs worked to the film’s benefit to mesh things a bit more. Still, the color and vibrance of the visuals were tough to ignore, making the 4K UHD treatment of The Lord of the Rings trilogy more of a triumph than a tragedy. 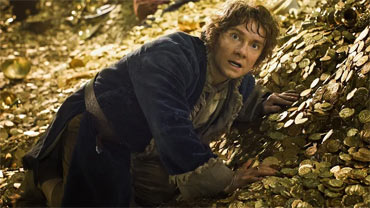 For The Hobbit trilogy, which began in 2012 — 9 years after the final entry in the The Lord of the Rings series — Jackson shot the films in a higher frame rate and digitally (rather than on film). So, to see them in 4K UHD feels like a much more natural visual upgrade. To say the very least, the first film in the series, An Unexpected Journey, is simply mindblowing in 4K. And for The Desolation of Smaug, it just keeps getting better. The sunset over Laketown, the little flakes of snow, and every little glint of gold coins in Smaug’s lair — it’s spectacular. For The Battle of the Five Armies, things seemed just a bit too sharp at times, but that may have been due to much more of the film taking place in bright, snowy areas, instead of the darker halls of Erebor or the woodlands surrounding it. Still, this is some of the best 4K I’ve seen yet, so if you’re a fan of the movies, I definitely recommend it.

Now, for revisiting the movies themselves, I found myself really enjoying seeing An Unexpected Journey again. It definitely helped that I had just rewatched all of the extended versions of the The Lord of the Rings films, so it was great revisiting Middle Earth for The Hobbit. But while I rewatched the extended LOTR movies, I decided to only rewatch the theatrical versions of The Hobbit. The theatrical cuts were all already too long and filled with fluff that the extended versions just seemed so excessive and unnecessary. If anything, I would love to see the originally planned two-movie cut of The Hobbit series, before Warner Bros. asked Jackson to expand it to three (overly long) movies. When I got to The Desolation of Smaug, it already started feeling like it was meandering a bit. I skipped over the Mirkwood sequence entirely (Giant spiders? No thank you!), but watched the rest of the film after it. I loved seeing LOST‘s Evangeline Lilly join the cast as an elf named Tauriel, and it was certainly surreal seeing Orlando Bloom return as Legolas. My favorite sequences in Desolation are definitely when Bilbo and the dwarves encounter Smaug. Martin Freeman is fantastic as Bilbo (even if he feels so different than Ian Holm’s version), and it’s a blast to see him face-off with his Sherlock co-star, Benedict Cumberbatch as Smaug. But the movie does drag some with the Laketown subplot, as well as the forced love story between Tauriel and the dwarf Kili. The Battle of the Five Armies gets off to a destructive start with Smaug’s attack on Laketown, but it really seems to struggle from there. It’s just much too long, Alfred is a truly tortuous character to watch (He makes me long for Jar Jar Binks), and Thorin’s story just seems ill-executed. Overall, it brings the series to a limping finish, leaving me wishing it held up to the promise of the series’ start with Unexpected Journey. 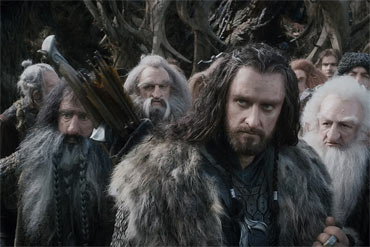 This new 2020 The Hobbit trilogy 4K UHD set includes 6 discs and, surprisingly, no bonus features. The set does include both the Theatrical Versions of the films and their Extended Version, each on their own separate discs (Which is a nice change from the LOTR Extended Versions being split up onto two discs). The set also includes Digital UHD copies of all 3 films in BOTH versions. For those wishing there were bonus features, you may want to wait till 2021 to get the 4K disc release. According to Warner’s press release for this set, they’re planning a loaded set for next year: “A 4K UHD “Middle-earth” Ultimate Collectors’ Edition featuring the theatrical and extended versions of all six films, along with new bonus content, previously released Blu-ray discs of The Hobbit Trilogy, and remastered Blu-ray discs of The Hobbit Trilogy will be released in the summer of 2021. The Hobbit Trilogy featuring remastered Blu-ray discs of the theatrical and extended versions of the 3 films will also be released in the fourth quarter 2021, to celebrate the 20th anniversary of The Hobbit: The Fellowship of the Ring.” So if you’re hoping for those Jackson production diaries or making-of featurettes, you may want to hold out.

Overall, The Hobbit trilogy 4K UHD presentation is amazing (despite the movies themselves being a step down from The Lord of the Rings). The clarity literally had me wowed, and the color is gorgeous as well. If you’re a diehard fan with 4K viewing capabilities (you’ll need a 4K player and a 4K TV), you’ll want to check out this set. But if you’re one who loves the extras, and don’t own the previous expansive sets, you will probably want to wait till the more complete 2021 release.

Note: The still frames of the films used in this review are NOT taken from the 4K UHD transfers.