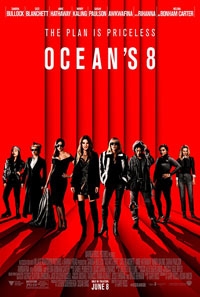 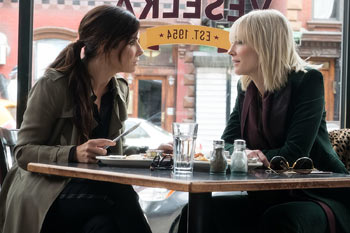 Reboots have become such commonplace that the average moviegoer is most likely starting to get numb to the concept. But sequels like Jurassic World and Star Wars: The Force Awakens have served as what one would call “soft reboots.” These sequels build on the franchise entries before them while paving the way for new stories apart from their original foundation.

The Ocean’s franchise rebooted in 2001 when the original 1960 film starring Frank Sinatra and Dean Martin was given a modern retelling with George Clooney and Brad Pitt. It did so well that this remake spawned two more sequels, cutely titled Ocean’s 12 and Ocean’s 13. All three films were slick, fun heist films, but as Hollywood would so boldly point out in today’s social climate — the cast were all predominantly male.

In 2016, Sony audaciously rebooted the beloved Ghostbusters franchise with an all-female comedienne cast. And while that attempt — which also ignored the previous two films to serve as a full-on remake — failed, it hasn’t stopped other studios from making similar ventures. Last year, Universal debuted a female mummy in their reboot of The Mummy, and this year, a remake of Overboard saw a gender reversal to give the film a new take. This summer, Warner Bros. gives audiences a fourth Ocean’s film, but it’s not involving the Ocean we’ve come to know. Ocean’s 8 is driven by a predominantly female cast, involving Danny Ocean’s sister, Deborah, as she dives right back into a life of crime just as she gets out of jail. 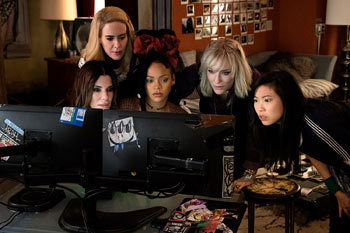 On paper, the idea is worthy of an eye roll or two, but once an ensemble cast that is led by Sandra Bullock and Cate Blanchett was assembled, the project became one to sit up and take notice of. Still, what Ocean’s 8 proves to be is nothing less than a soft reboot. In the same way Jurassic World and The Force Awakens took the reins from their predecessors and built on them while taking their respective series in a new direction with new central characters, Ocean’s 8 exists within the same world as 11, 12 and 13, but sets out to forge its own path. (Mild spoiler ahead) From the very opening scene, as Debbie is being evaluated for parole — just as her brother did in 2001 — she drops the bomb that Danny has passed away… and immediately, fans of the trilogy have to process a bit of a gut-punch that feels extremely unnecessary to deliver. The death of Danny Ocean is something that doesn’t serve the plot at all, but there’s enough ambiguity and doubt cast about whether it’s true or not to give fans some hope. However, this doubt is almost entirely abandoned by the film’s end, but is still shrouded in ambiguity. And it’s unfortunate, too, because it feels a little bit like a middle finger to fans of the previous franchise entries (which is weird, because the film otherwise tries to pay homage to it). And that gets the film off on the wrong foot right out of the gate.

The rest of the movie unfolds much like Ocean’s 11, 12 and 13. We have our central mastermind of the operation who presents their scheme to a close partner and then the team rounds up its players and gets the ball rolling. The other male-led films majored on fun and keeping things light, and Ocean’s 8 does well in copying that tone and feel. Director Steven Soderbergh did a great job keeping that cool, slick, classy feel throughout the series and first-time-Ocean’s director Gary Ross captures Soderbergh’s style almost perfectly. If anything, he may adapt it a little more appropriately for the contemporary, popcorn-munching audience (while Soderbergh’s style was more indie and quirky). David Holmes’ jazzy, cool and fun scores for 11, 12 and 13 were also highlights of those films, elevating them quite a bit, and Daniel Pemberton–who did a classy, 60’s-inspired score for The Man from U.N.C.L.E.–beautifully captures Holmes’ style for this entry, mixing in a bit of his own personal touch to create something very Ocean’s, but also fresh for a new chapter like this.

As a female-led caper, and an Ocean’s entry, Ocean’s 8 is relatively solid. It isn’t quite as good as its predecessors (although repeat viewings may change that), but each player involved gives it their all and helps make this a strong effort. Bullock and Blanchett are excellent, and their support from Helena Bonham Carter, Anne Hathaway, Sarah Paulson, Mindy Kaling and even Rihanna and Awkwafina are great across the board. There are a couple cameos from the original Ocean’s cast – which I won’t spoil here – and it’s a mix of exciting and bittersweet, but the girls are so good on their own that the movie is enjoyable as it is, to the point where it works without the originals having a bigger presence. Still, the cameos and references to the preceding team help ground this chapter in that world and validate it as an Ocean’s film.

Still, the fact this IS an Ocean’s film feels rather contrived, and one can’t help but find its gimmicky premise palpable. The fact that Danny has a sister he’s never mentioned in three previous movies, who is also known for a life of crime, seems all too convenient for a sequel. Furthermore, this entry takes several beats from the 2001 film, which makes this one feel all the more like a reboot, remake (of a remake) and a retread. It isn’t enough to sink the entire production, but when Blanchett pulls Debbie aside to have an all-too-familiar conversation about her ulterior motives for the heist, it starts to feel forced and too much like a retread instead of moving forward. I get that it’s more than likely an homage to George Clooney and Brad Pitt’s scene and relationship, but it makes Ocean’s 8 feel too derivative.

As far as content goes, Ocean’s 8 is right in line with 11 and 12 (13 was milder overall). Hathaway spouts the film’s lone audible “F” word, while one is abbreviated in text form (as “fkin”). There’s also roughly a dozen uses of the “S” word and variations of “G-d,” while a handful of other profanities – including at least 3 of Jesus’ name in vain – are uttered. Sexual content isn’t intense, but there’s a scene where Hathaway makes out with a man, straddles him while she’s wearing lingerie (or a small dress), and then we see him cuffed to a bed (but nothing else happens or is at least shown). Some art sculptures and paintings are shown with bare butts or chests visible briefly, but it’s not really focused on much, or especially sexual in nature. The only real violence in the movie is a woman slapping a man’s face, but it’s mostly played for shock and laughs. Another moment has Debbie threatening a man with a shiv, but she doesn’t use it.

Perhaps the biggest concern of the franchise is its glorification of theft and robbery. Personally, I don’t feel inclined to knock over a bank after watching one of these movies, but that isn’t to say it wouldn’t make an impression on some viewers. Ocean’s 11 and 13 were more about revenge and getting even with bad people than robbing someone, but it still was all about stealing (and made it seem fun and cool). Ocean’s 8 is all about stealing a near priceless diamond necklace that is otherwise locked away in a vault and no one sees it. Removing the revenge factor (although Heaven knows that isn’t justification for stealing), makes the job feel more malicious, which is unfortunate. (There actually is a revenge element to the plot, but it has nothing to do with who they’re stealing from.)

Overall, Ocean’s 8 exceeded my expectations. I really enjoy Ocean’s 11, 12 and 13 — especially for the cast of characters and the stellar musical scores from David Holmes — so I was especially leery about this gimmicky reboot. However, Bullock and company proved more than able to get the job done (no pun intended), and while I’m a little miffed at the idea that Danny Ocean may be gone forever, I’m intrigued more than ever at the possibility of seeing some of the players from both teams uniting in the future — maybe even the Ocean siblings? Warner Bros, make it so!

Sex/Nudity: Several paintings and sculptures show nudity in an art museum. In one scene in a person’s apartment, we see a painting that shows bare butts; Some women show cleavage while wearing dresses throughout the film, especially Daphne whose dresses often reveal a great deal of cleavage; Lou and Debbie have low dropping necklines in outfits they wear to or after the gala; At a gala we see a few men wearing make-up or talking feminine; We see a brief scene of a couple making out with him grabbing her bare leg (she’s in a dress) as they kiss passionately; A woman passionately kisses a man and comes on to him, straddling him as they kiss. We then see him without a shirt, handcuffed to his bed, but nothing else seems to happen (and he wakes up the next day alone).

Alcohol/Drugs: Nine Ball is seen smoking a big joint in several scenes; The girls have some drinks during the film; There is drinking at a gala event; Debbie pours a martini and sips it while sitting outside of a grave.

Violence: Debbie holds a shiv to Claude’s neck and threatens him. She then cuts a button off his shirt; Some guards at the gala have guns; A woman slaps a man in the face really hard while trying to come on to him.